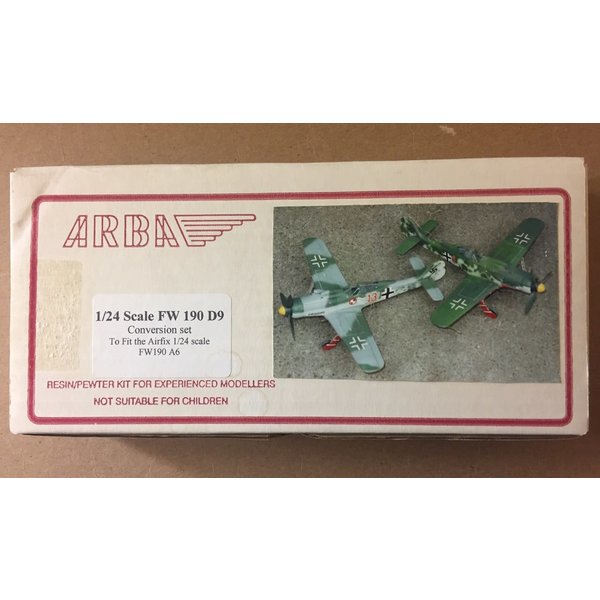 Issued a couple years before the Trumpeter Fw190D-9 kit appeared, this set intended for you to convert the old & controversial AIRFIX Fw190A-6 to D-9 format. The poor Airfix kit has been savaged by critics over the years & this conversion set allowed you to make something decent out of that poor thing, though not without some effort ! This set gives you all resin parts, no pewter parts as stated on the box [obviously ARBA decided against pewter, for whatever reason], decals for two aircraft & full instructions-though the instructions are in text form, no pictures-thus reading skills are a requirement ! Since the process involves grafting these lovely resin parts into the Heller quality AIRFIX parts without the benefit of pictorial instructions, most modelers will now wimp out & just build the Trumpeter offering instead. This is a shame as these parts are really nice & will make the AIRFIX kit into a show stopper.

This set was popular enough in it's day to warrant at least two production runs, probably fairly small runs. Thanks to the Trumpeter issue, this set is now not required & has been discontinued. I wonder how many of the sets that were sold actually got used for their intended purpose ? Anybody wanna send me some pictures of their finished model ???        send images to -  [email protected]

This is a builder's set- for those who revel in the art of building a model, not merely assembling a plastic kit straight out of it's box. Is it calling to you?

This is not a used item. It was purchased new & has been in our storage for a while. Most of our resin sets are crowded into one or two display cases & not easily seen.

Check out this review from largescaleplanes  one of the most outstanding modeling websites on the interweb ! :