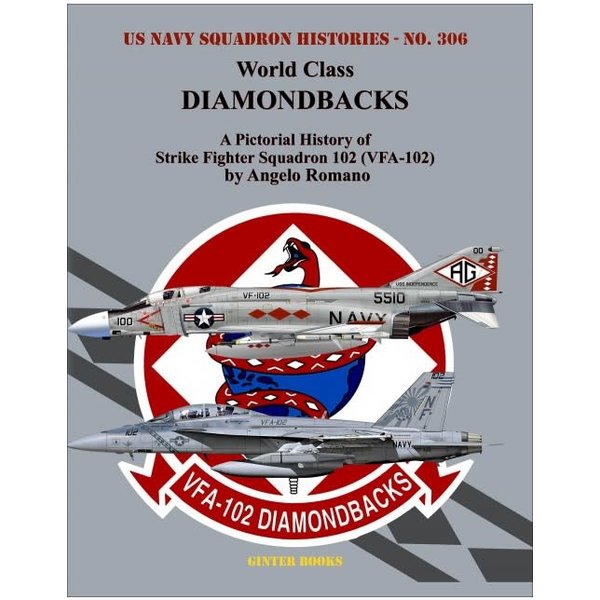 The DIAMONDBACKS' inaugural deployment took place onboard the USS RANDOLPH (CV-15), in July 1956. After this deployment, the squadron transitioned to the Douglas F4D-1 Skyray.

In 1960, the DIAMONDBACKS moved to NAS Oceana, Virginia, and transitioned to the McDonnell Douglas F-4B Phantom II. This marked the beginning of a 20-year association with the Phantom.

In June 1981, the DIAMONDBACKS bade farewell to the Phantom and transitioned to the Grumman F-14A Tomcat. The Tomcat's design provided the pilot and RIO with a formidable air-to-air radar and weapons system. The long-range AWG-9 radar and its multiple track, multiple launch capable AIM-54 Phoenix missile system, AIM-7 Sparrow and AIM-9 Sidewindermissiles, and the six-barrelled 20mm cannon, comprised the Tomcat's weapons suite. With the addition to the Tomcat of the Tactical Air Reconnaissance Pod System (TARPS) in 1982, the DIAMONDBACKS added the tactical aerial photo reconnaissance mission to their traditional fighter role.

In 1992, VF-102 and the Tomcat entered the critical air-to-ground mission area, thus solidifying the DIAMONDBACKS' role as a strike fighter squadron, and leading the way into the 21st century.

In 1994, the DIAMONDBACKS transitioned to the re-engined F-14B and, with the installation of the Low Altitude Navigation Targeting Infrared for Night (LANTIRN) pod in 1998, they added the precision strike mission to their capabilities.

In 2002, VF-102 was assigned to Commander, Strike Fighter Wing Pacific and transferred to NAS Lemoore, California to transition to the Navy's newest strike fighter, the Boeing F/A-18F Super Hornet.

In March 2002, the DIAMONDBACKS were redesignated Strike Fighter Squadron 102 (VFA-102). After completion of the transition to the Super Hornet, VFA-102 moved across the Pacific to Naval Air Facility Atsugi, Japan, to join Carrier Air Wing FIVE (CVW-5), the Navy's only forward deployed air wing and part of the Forward Deployed Naval Forces (FDNF).