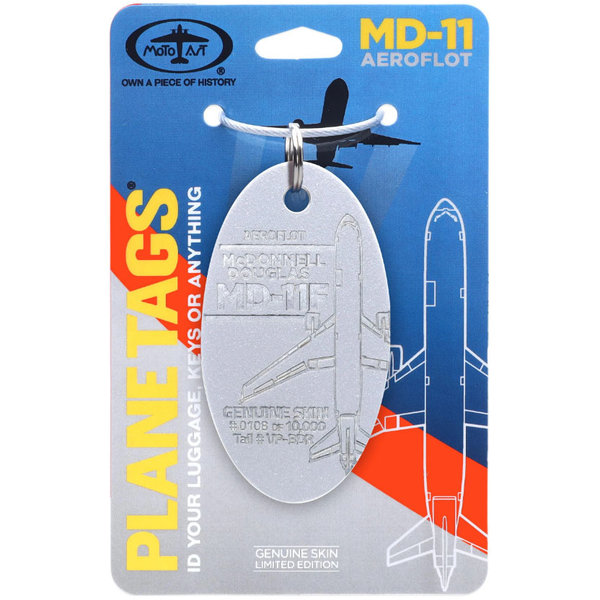 The MD-11, manufactured by McDonnell Douglas and later by Boeing, is a wide body tri-jet born from the DC-10. It stretched 18.6 feet longer than the DC-10 and featured aerodynamic advancements such as a redesigned wing trailing edge and winglets, smaller horizontal tail and extended tail cone, which reduced drag and added range while using less fuel. Other advances in cockpit avionics, propulsion, systems and interior design promised to make this aircraft an economical and competitive choice, but ultimately only 200 were produced – and only 53 of these were MD-11Fs. Boeing ended production in 2000 and delivered the last MD-11 on February 22, 2001.

Aeroflot was founded in 1923, making it one of the oldest active airlines in the world. Following World War I and the Russian Civil War, Russia, like other European countries, began developing civil aviation for its economic needs by offering passenger, mail, and cargo transport. Today, Aeroflot flies to 146 destinations in 52 countries, has been named “Strongest Brand in Russia”, and the airline continues to strengthen its position despite the pandemic.

Our VP-BDR was produced in Long Beach, California, delivered in early 1993, and leased soon after to Garuda Indonesia, as one of 26 MD-11s in their fleet. In 1999, this aircraft was then leased to Brazil’s Varig Airline, also rounding out their MD-11 fleet to 26. It was then converted to a freighter and delivered to Aeroflot in May of 2008. The freighter had only one notable incident – on a flight from Novosibirsk to Moscow’s Sheremetyevo International Airport on February 11, 2012, its number 1 hydraulic system failed upon descent but continued for a safe landing.

As part of SkyTeam Cargo, Aeroflot used VP-BDR and its fleet of cargo planes to transport goods from its central hub in Europe to the Middle East and Asia, cementing its position as a top global cargo carrier. She was retired by 2013 and stored at VCV.