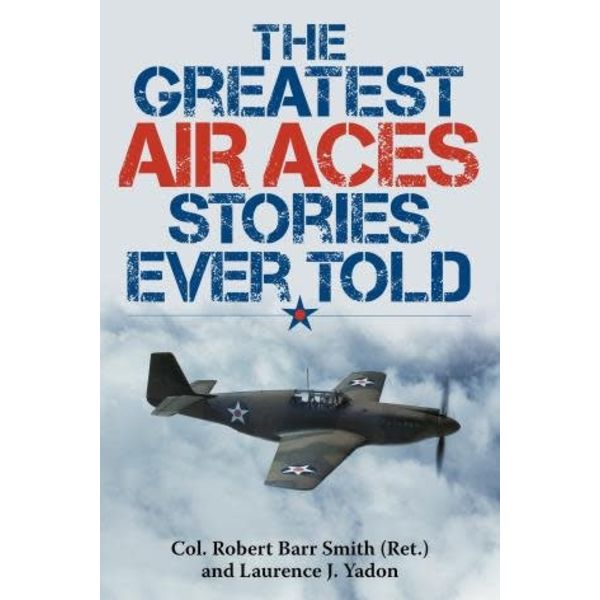 In thirty-five chapters, The Greatest Air Aces Stories Ever Told covers many of the leading American and British Commonwealth fighter aces of WW I and II, together with a few bomber crews whose gallantry made a substantial contribution to the end of WW II. Other nations had their aces, but this book concentrates on American and Commonwealth pilots.

These aviators were chosen not only because of their “scores” and their great courage, but also for
other qualities which set them apart, like the WWII Royal Air Force Wing Commander who shot
down more than 20 Germans while flying with two artificial legs.

Here are a few of the aces. Note that the air forces of Europe and the United States did
not always have today’s names, used here for simplicity’s sake:

Albert Ball, RAF, son of the Lord Mayor of Nottingham, winner of the Victoria Cross. He
had 44 victories in WWI when he was killed at the age of 20, well known to his German foes, who
much admired him.

Gabby Gabreski, USAF. Son of hard-working Polish immigrants. An ace in WWII with 28 kills and later in Korea, with another six. He was an accomplished commander, finished a long career as a colonel.

Mick Mannock, RAF. Tough and aggressive in spite of his fear of fire, he won not only the Victoria Cross, but five other high awards for gallantry. Highest British scorer of WWI with 73 victories, he detested Germans, and rejoiced with every kill. He was shot down by ground fire in the last year of the war.

David McCampbell, USN. Scored 34 WWII kills to become the U.S. Navy’s all-time ace. In 1944, set an all-time record with nine victories on a single mission. Winner of the Congressional Medal.

Pick Pickard, RAF. Led the RAF rooftop bomber raid on Amiens Prison In WWII, freeing many underground members, some of whom were facing death, and who were promptly spirited away by French partisans.

Frank Luke, USAF. Deadly American famous for his busting of German observation balloons in WWI. Shot up over German territory, he managed to land safely, but, being Luke, tried to fight it out with enemy infantrymen with only his pistol.

The book will also touch on the equipment these aces flew, from the famous Fokkers and Sopwith Camels to the ungainly two-seater FE2b, which was driven by a pusher engine and looked like a bathtub with wings and a miniature oil derrick glued on the back. Also included are our own Grumman carrier fighters, the P-40s, the P-38s, as well as the P-51 Mustang, probably the finest fighter of the war, a happy marriage of an American airframe and a British engine. The deadly, graceful Spitfire has its place, as do the Hurricane, the biplane Gladiator, and even the four-engine Lancaster.