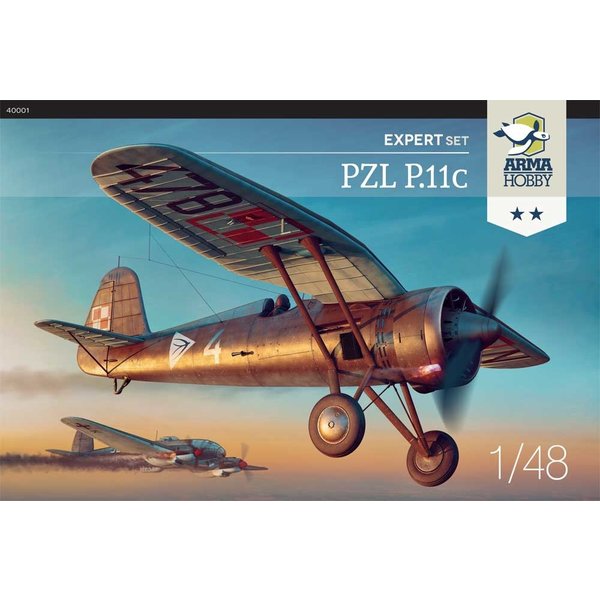 We have had 1/48 PZL P11c's before, LTD [ through dear,dead SQUADRON MAIL ORDER ] & Mirage [also from Poland] spring to mind, but they will not compare with this state of the art beauty. Check out ARMA HOBBY'S post below-

The PZL P11c was the first allied aircraft of WW2 to strike down the enemy. It is the most iconic of all Polish aircraft and is as important to the Poles as the Spitfire is to the British. It is from flying aircraft such as these in combat that Polish pilots gained the experience that they then drew upon to further engage the enemy on Hurricanes & Spitfires. While Allied pilots were still learning their ABC's, Polish pilots had already scored kills during the Polish & French campaigns.Polish pilots were the FIRST TO FIGHT ! It has been said that the outcome of the Battle of Britain may not have been the same without the efforts of Polish, & many other foreign pilots. It all began here, with the PZL P11c.

In the early morning of 1 September 1939, Gnyś was woken by a German bombing raid on Kraków. At about 7 am (according to other sources, 5:30 am) Gnyś flew a sortie with Cpt Mieczyslaw Medwecki [pl], the Group Commander. Just after take off and at about 300 meters altitude the Polish fighters were suddenly attacked by a pair of German Ju 87Bdive-bombers from I/StG 2 "Immelmann". Unteroffizier Frank Neubert successfully fired at Medwecki and scored probably the first aerial victory of the war. The P-11 fell away having suffered serious damage, and Medwecki was killed. Gnyś was now also under attack, but later shot at a "Stuka" piloted by Lt. Brandenburg. The German aircraft started to smoke, but managed to return to base at Nieder-Ellguth. A few minutes later Gnyś attacked two Do 17E bombers from KG 77. After a few passes both Do 17 bombers crashed in the country village of Żurada, near Olkusz. One of the German bombers was coded "3Z+FR" on its fuselage and all six crew members were killed, one later identified as a Uffz. Klose. On his return to base Gnyś met a lone He 111, but he was out of ammunition.