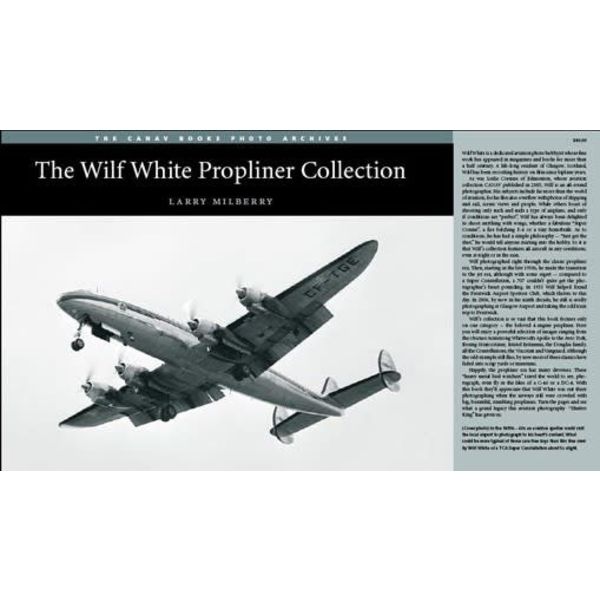 Wilf White is a dedicated aviation photo hobbyist whose fine work has appeared in magazines and books for more than a half century. A life-long resident of Glasgow, Scotland,Wilf has been recording history on film since biplane years.

As was Leslie Corness of Edmonton, whose aviation collection CANAV published in 2005, Wilf is an all-round photographer. His subjects include far more than the world of aviation, for his files also overflow with photos of shippingand rail, scenic views and people. While others boast of shooting only such and such a type of airplane, and only if conditions are "perfect", Wilf has always been delighted to shoot anything with wings, whether a fabulous "SuperConnie", a fire belching F-4 or a tiny homebuilt. As to conditions, he has had a simple philosophy — "Just get the shot," he would tell anyone starting into the hobby. So it is that Wilf's collection features all aircraft in any conditions,even at night or in the rain.

Wilf photographed right through the classic propliner era. Then, starting in the late 1950s, he made the transitionto the jet era, although with some regret — compared to a Super Constellation, a 707 couldn't quite get the photographer's heart pounding. In 1953 Wilf helped found the Prestwick Airport Spotters Club, which thrives to this day. In 2006, by now in his ninth decade, he still is avidly photographing at Glasgow Airport and taking the odd train trip to Prestwick.

Wilf's collection is so vast that this book focuses only on one category — the beloved 4-engine propliner. Here you will enjoy a powerful selection of images ranging from the obscure Armstrong Whitworth Apollo to the Avro York, Boeing Stratocruiser, Bristol Britannia, the Douglas family, all the Constellations, the Viscount and Vanguard. Although the odd example still flies, by now most of these classics have faded into scrap yards or museums.

Happily, the propliner era has many devotees. These "heavy metal bird watchers" travel the world to see, photograph, even fly in the likes of a C-46 or a DC-4. With this book they'll appreciate that Wilf White was out there photographing when the airways still were crowded with big, beautiful, rumbling propliners. Turn the pages and see what a grand legacy this aviation photography "Shutter King" has given us.