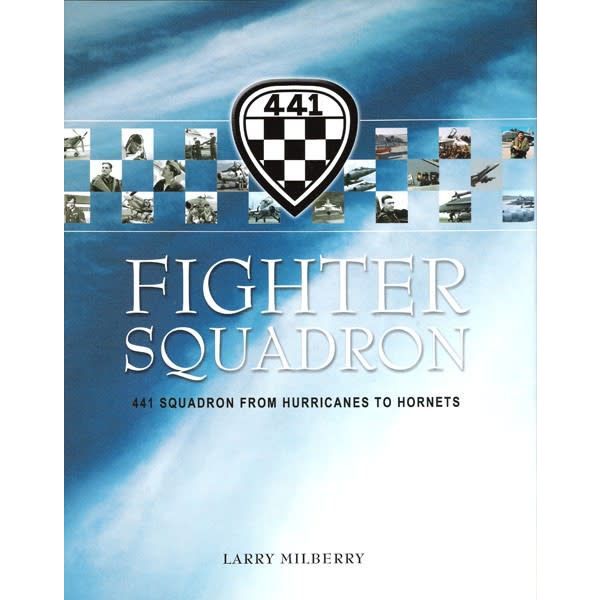 The grandest history of any Canadian squadron and Canada's aviation book of the year for 2004. It begins with 125 Sqn flying Hurricanes in Newfoundland. Army co-op, flying a Hurricane through a ships rigging, surviving a head-on collision, rescue at sea, first losses. 125 goes overseas to become 441 Spitfire ops from the UK, then in France after D-Day. All the details from the ORBs (kills, losses, etc.), interviews with wartime pilots. Mustangs by war's end. Postwar years on Vampires, then Sabres in NATO. Recce CF-104s from 1964, then nuke and conventional attack roles to 1986. In-depth coverage of the CF-18 Hornet years NORAD, William Tell, Bears, Aviano, 9-11, etc. It's a hardcover with 700 photo spread throughout 320 pages.

If you follow Canada's great aviation heritage, here is a book that is sure to "light your burners"! In 320 pages, 26 chapters and 700+ photos, Fighter Squadron celebrates one of Canada's truly legendary RCAF/CF squadrons. You will read of 441's beginnings, flying the famous Hurricane in a time when the unit was known as 125 Squadron. Operating on Canada's east coast, its mission is to help blunt any Axis threat, whether by long-range bomber or U-boat. For U-boat patrols, 125 carries depth charges, something that would have amazed the Hurricane's designers.

In 1944 the squadron goes overseas to join in the Air Defence of Great Britain. Now known as 441 Squadron, it flies Spitfire IXs on convoy patrols, escorts Allied bombers to targets in France, and conducts cross-channel "Rhubarbs" in search of targets of opportunity. Later, 441 gains renown in post- D-Day Normandy, harassing the Germans on the ground and destroying more than 50 enemy aircraft. Come the spring of 1945 and 441, by then re-equipped with Mustangs, faces disbandment along with most other RCAF squadrons.

The squadron soon reappears. Postwar come Cold War tales of the Vampire, then the classic Sabre. In its sentinel role with NATO the Sabre evolves into a legend of its own, and 441 excels from its bases at North Luffenham in England, and Marville, France. Along with its other NATO squadrons, Canada rules the skies over Western Europe, often taking top honours in NATO gunnery competitions.

The Sabre gives way to the awesome CF-104 Starfighter, first in nuclear strike and "recce", then in conventional strike (as far as 441 is concerned, its Starfighter "glory days" were in recce). Greatly loved by those who flew and serviced it, the Starfighter equips 441 into 1986. Finally, the Silver Foxes convert to the CF-18 Hornet, one of the world's top multi-role fighters. By 2004 this magnificent aircraft, in the midst of a "mid-life" ugprade, remains in 441 service. In the Hornet chapters you'll find 441 on deployment in the Arctic, competing in a host of exercises, tracking Soviet Bear bombers, in combat over Kosovo, and on post-9/11 operations.

Besides covering the aircraft, Fighter Squadron is a "people book" telling of daily life, exercises and operations. Here is a story of and for all those who served. Throughout the book the approach is consistent – solid research, great first-hand coverage, incredible photos. You needn't have served on 441 to totally enjoy this special book!