Boyd: The Fighter Pilot Who Changed the Art of War SC by Back Bay Books 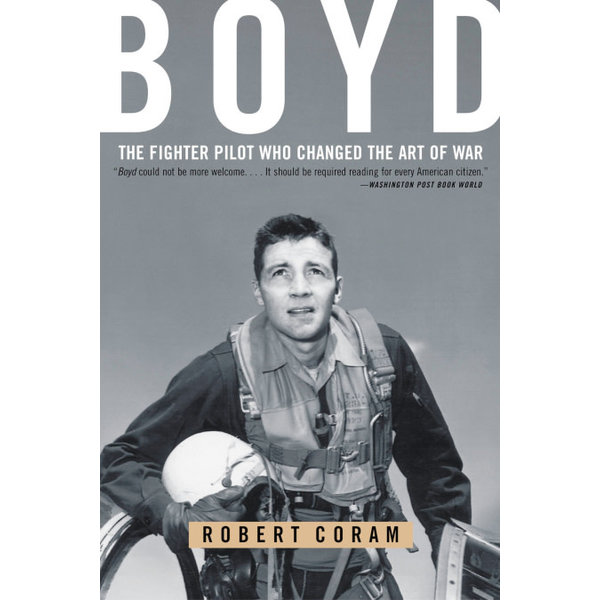 Boyd: The Fighter Pilot Who Changed the Art of War softcover

John Boyd may be the most remarkable unsung hero in all of American military history. Some remember him as the greatest U.S. fighter pilot ever — the man who, in simulated air-to-air combat, defeated every challenger in less than forty seconds. Some recall him as the father of our country’s most legendary fighter aircraft — the F-15 and F-16. Still others think of Boyd as the most influential military theorist since Sun Tzu. They know only half the story.

Boyd, more than any other person, saved fighter aviation from the predations of the Strategic Air Command. His manual of fighter tactics changed the way every air force in the world flies and fights. He discovered a physical theory that forever altered the way fighter planes were designed. Later in life, he developed a theory of military strategy that has been adopted throughout the world and even applied to business models for maximizing efficiency. And in one of the most startling and unknown stories of modern military history, the Air Force fighter pilot taught the U.S. Marine Corps how to fight war on the ground. His ideas led to America’s swift and decisive victory in the Gulf War and foretold the terrorist attacks of September 11, 2001.

On a personal level, Boyd rarely met a general he couldn’t offend. He was loud, abrasive, and profane. A man of daring, ferocious passion and intractable stubbornness, he was that most American of heroes — a rebel who cared not for his reputation or fortune but for his country. He was a true patriot, a man who made a career of challenging the shortsighted and self-serving Pentagon bureaucracy. America owes Boyd and his disciples — the six men known as the “Acolytes” — a great debt.

Robert Coram finally brings to light the remarkable story of a man who polarized all who knew him, but who left a legacy that will influence the military — and all of America — for decades to come . . .