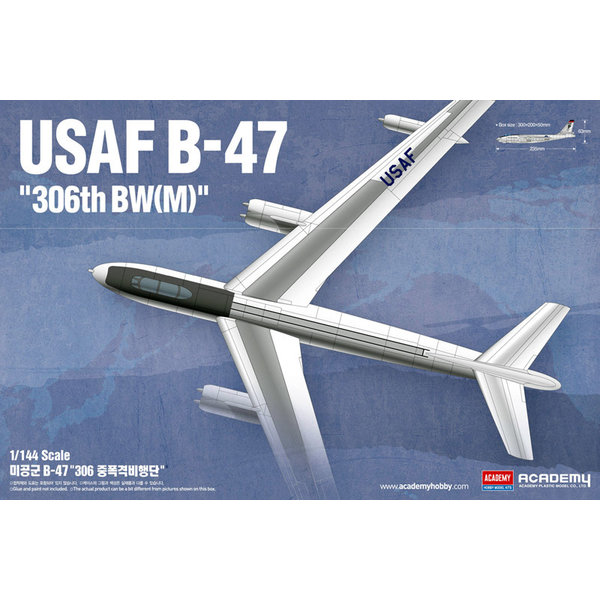 Hobbycraft did their best to produce model kits that appealed to the beginning modeler and were simple to build. In many cases they succeeded, in some-they did not. The B-47 family of kits has to be considered a success & three kits were issued around 1998 including the B-47B,B-47E & RB-47H that were fairly straight-forward to build, but did need some twiddling with the engines & outriggers for optimum results. With some basic modeling skills & a little TLC, these kits produced some nice models, as can be seen on several online builds. Hobbycraft ceased to exist [ as a kit manufacturer ] circa 2012 & many of their molds transferred ownership to Academy.

Academy has done us all a favour & issued ALL the parts that came with the three individual kits in ONE box. Here is that box & if you are a B-47 fan, you can have some real fun with it ! The decal sheet does include markings for 11 different aircraft, but keep in mind that most of these aircraft were natural metal & all that was different were the serials & codes and maybe a crest or flash. As typical with Hobbycraft kits, there is always some work that needs to be done somewhere to achieve perfection, but nothing that some basic modeling skills cannot overcome in this case.

Hobbycraft has been much maligned by a small but vocal group of so-called modelers who dismiss their efforts at creating simple models with much venom. Yes, some kits were dogs, but many could be built upon by skilled modelers into very nice productions. Many resin, etch & decal manufacturers owe their very existence to Hobbycraft for providing them with a framework upon which to build their catalogs of after-market parts & detail sets. In a final twist of irony, Hobbycraft kits are considered RARE by many sellers on ebay or Amazon, as their distribution was poor outside of Canada, and are being listed for ABYSSMAL prices for sale as collectors' pieces ! Hobbycraft kits were never rare, they were produced in the thousands & the idea of a 'limited run' never entered into the vocabulary. Tell 'em George! We in the GTA were blessed with good distribution as the warehouse was just north of Toronto & kept us well supplied with any kits we needed. We took them for granted while they were around- now that they are gone, there is a void that cannot be filled.