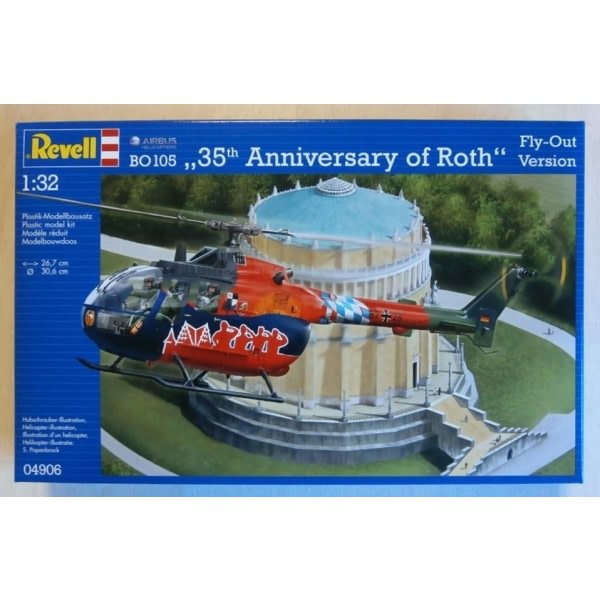 Combat Helicopter Regiment 26 'Franconia' was disbanded in 2014 after 35 years of service, being based at Roth Air Base in Bavaria. This colorful livery represents their Farewell scheme as they flew out of Roth for the last time in December 2013. Kampfhubschrauberregiment 26 was an anti-tank regiment equipped with the Bolkow Bo105P, a very successful Light Helicopter design from the manufacturer Bolkow GmbH, designated PAH 1 [ Anti-Tank ] & ultimately replaced in it's role by the Eurocopter Tiger around 2013.

In case you are wondering why Revell-Germany makes so many BO105 kits, it is because this is one of the most successful helicopter designs to come out of Germany, flying in many military & civilian roles and ultimately being exported to users all over the world ! The German army operated 212 anti-tank 'P' versions & 100 'M' versions [ liason & observation ] from 1979 until it's retirement in 2016. A number of these were used by the Canadian Coast Guard [ being replaced in 2016 by the Bell 429 ] & the last BO105 made, in 2009, was bought by Canadian EMS specialist DAM Helicopters. A lovely all plastic kit of an important aircraft- so there !

Contrary to popular belief, this aircraft scheme has nothing to do with Dave Lee Roth, former lead singer of Van Halen [ he would be so lucky ! ]