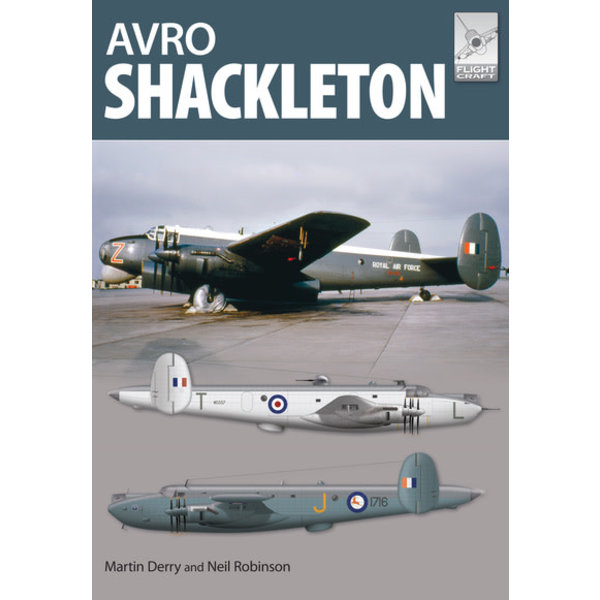 Initially projected as a maritime reconnaissance version of the Lincoln bomber, itself a development of the famous wartime Lancaster which saw post-war service in a General/Maritime Reconnaissance role, (see Flight Craft No 4), the Avro Shackleton, (named after the polar explorer Sir Ernest Shackleton) was a completely new design, powered by four Rolls Royce Griffon 57 engines driving six blade contra-rotating propellers.

Split into three main sections, this latest Flight Craft title, perfectly timed to coincide with the release of the first examples of the eagerly awaited new tool 1/72 scale Airfix kit, offers a concise history of the Shackleton's development and operational career from the prototype and initial entry in to RAF service in 1951, and its use with the South African Air Force, the only other operator of the type.

Section 1 chronicles its design, ongoing improvements and development through the three main Marks, in both the Maritime Reconnaissance and Airborne Early Warning roles, until its retirement after four decades of RAF service in 1991, which includes scores of contemporary photographs with detailed captions, many of which have never been seen in print before.

This is followed by a 16-page colour illustration section featuring profiles and 2-views of the colour schemes and markings carried by the type in RAF and SAAF service. The final section lists all the plastic model kits, accessories and decal sheets produced of the Shackleton in all scales.

As with the other books in the Flight Craft series, whilst published primarily with the scale aircraft modeller in mind, it is hoped that those readers who might perhaps describe themselves as 'occasional' modellers may also find that this colourful and informative work offers something to provoke their interests too.