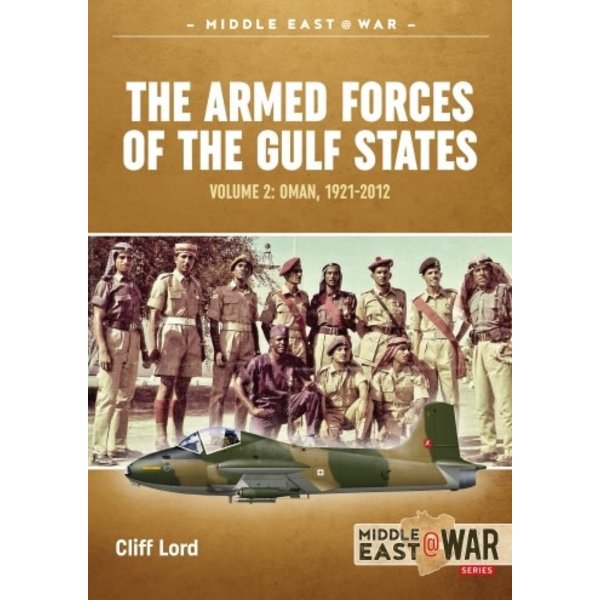 ‘The Armed Forces of the Gulf States, Volume 2’, covers the military, police, and selected para-military services of the Muscat & Oman, and the successor Sultanate of Oman in period from 1921 until 2012. Great Britain and Oman have had various mutual defence treaties since centuries. This resulted in establishment of very close ties between the British and the Sultan of Oman’s armed forces. Since 1920s, the British seconded and contract personnel served with the latter services through forming, leading, advising and training them. ‘The Armed Forces of the Gulf States, Volume 2’, is providing not only the story of this service, but also an in-depth history of the emerging Sultan of Oman’s Armed Forces, the Dhofar Force, plus selected para-military services, including regimental and corps histories, and selected military operations. Richly illustrated – also with exclusive photographs and colour profiles of the uniforms, equipment, and insignia - this comprehensive history of Oman military forces from early days to independence and well beyond, is supported by an extensive glossary of terms and comprehensive time-charts, detailing the dates of formation and disbandment or re-designation of entire scores of units. ‘The Armed Forces of the Gulf States, Volume 2: Oman, 1921-2012’ is thus an indispensable source of reference for those interested in the military history of this part of the world, the history of the Arab-British cooperation, but also a memorial for those who served in the Sultan’s Armed Forces, and to their families.

"...a very well rounded edition that you will find interesting and a change from the usual of books of this type. Well worth picking up." ModelingMadness.com

"Well worth having as it has been well produced and researched." Sultans Armed Forces Association Journal

While we make every effort to maintain our online inventory, If this item is not available to order online, it is likely out of stock. We would be happy to order it in for you, or confirm availability of the item. Please feel free to email us at [email protected] or call 416-674-5959