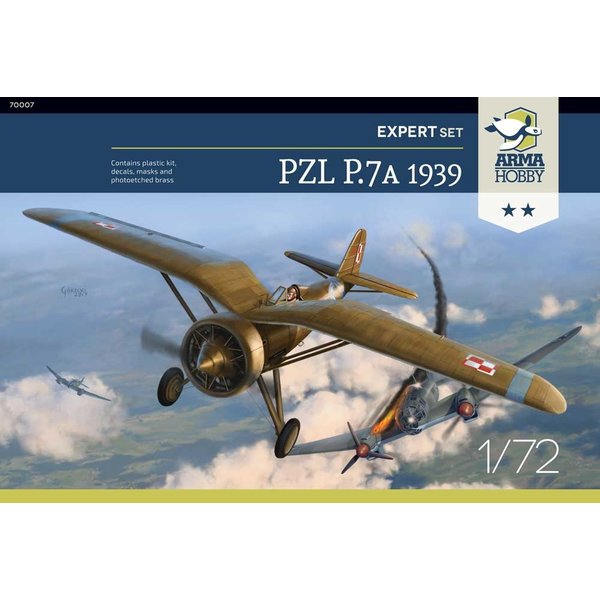 An important aircraft in the history of Polish aviation, as it led directly to the creation of the PZL P11c, arguably Poland's most famous aircraft. For a brief moment in the early 1930's, this aircraft represented the cutting edge of aviation design, but was totally obsolete by WW2. In spite of this, it entered combat in September 1939 & it's pilots were able to score a few kills, primarily against bombers.

The PZL P.7a entered service in spring 1933, replacing PWS-A (licence Avia BH-33) and PWS-10 fighters. Consequently, the Polish Air Force became the world's first air force entirely equipped with all-metal monococque fighters.[1][3] When the P.7 entered service, it was a modern fighter, comparable to or better than contemporary designs, but due to rapid progress in an aircraft technology, it became totally obsolete by 1939. From 1935, in most combat units the P.7 was replaced by the PZL P.11, which was only slightly more modern. The P.7as were then moved to air schools.

At the outbreak of World War II on 1 September 1939, the Polish Air Force still had 30 PZL P.7a fighters in combat units. A further 40 were in air schools, 35 in reserve or repairs – a total of 106 available aircraft. The P.7as were used in three squadrons, each with 10 aircraft. The 123rd Squadron was in the Pursuit Brigade, deployed around Warsaw, the 151st and the 162nd Squadrons were assigned to land Armies. Despite being obsolete, they took part in the defence of the country during the German invasion of Poland. Apart from combat units, at least 18 P.7a fighters were mobilized in units improvised at air bases in Dęblin and Ułęż.

Although the P.7 had better manoeuvrability than their German opponents and could operate from short fields (150 m to start), even rough ones, almost all the German aircraft were faster than the P.7a. Furthermore, the Polish aircraft and their engines were worn out from intensive service use. Their armament was also insufficient – only two Vickers machine guns in most aircraft, which had a tendency to jam (only from aircraft number 6.109 they were replaced with better PWU FK wz.33).[1] For these reasons, the pilots flying the P.7a claimed shooting down only seven German aircraft (two He 111s, two Do 17s, one Hs 126 and two Bf 110s), suffering combat losses of 22 aircraft. An improvised task force of P.7a aircraft from units at air bases was rather to confuse and disturb the German bombing raids with their aggressive presence, than to shoot down bombers.

Most of the P.7a fighters were destroyed in 1939, in combat or on the ground, some dozen were withdrawn to Romania, but not used in combat there. Some captured P.7s were used by the Germans for training. Several aircraft were captured by the Soviets (exact number is not known) and were next assigned for training.

This kit is part of a series of PZL P7a fighters issued by ARMA HOBBY. All kits share the same plastic parts, but some like this one, have added detail parts in etch & film for more realism. Modelers not wanting to fiddle around with iddy-biddy metal parts can buy the 'junior' sets which give you just the plastic parts which alone can produce a very nice model. I will be listing these junior sets as soon as time allows. This edition gives you decals for four aircraft that actually saw combat during the September campaign, one sharing a kill, a rare occurence for the P7a !