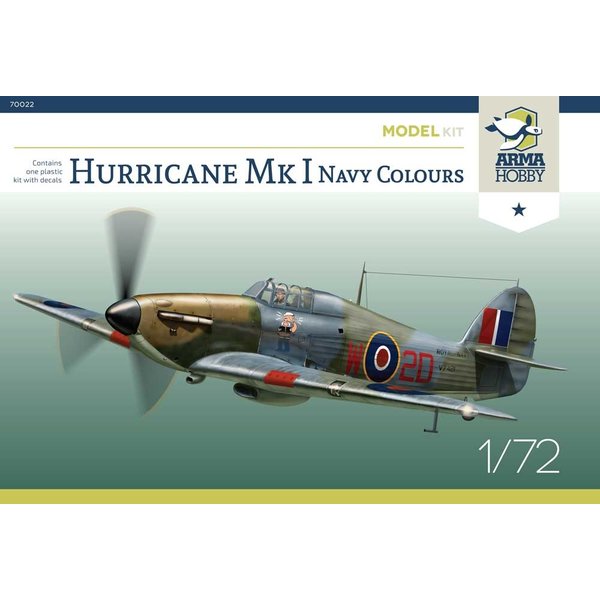 One of at least ELEVEN different Hurricane kits issued by ARMA HOBBY, not merely different variants but different levels of complexity- from 'junior' to 'expert' [ which has etch, masks & film components ]. These are short run style plastic kits that will require careful assembly, yet a keen beginner with a few basic kits under his belt should be able to put together one of the standard all-plastic versions of this kit.

We have not exactly been wanting for good Hurricane kits on the retail market for the last few decades, but the aircraft is so popular & important that modelers & manufacturers both continue to try to render the most perfect example. The mass market has issued a wealth of fine Hurricane kits in 1/72 scale over the years & the current crop of AIRFIX Hurri's is absolutely top notch !...yet it seems there is always room for improvement & here ARMA is no doubt trying to present details that have been 'missed' by the competition or cover variants that they have not attempted. This kit gives you three different spinners [one being a Spitfire spinner] & two types of propeller blades [Dehavilland & Rotol] & decals for three aircraft, including one for an RAF 318 [Danzig] Squadron machine [ a Sea Hurri with a Polish chessboard !]-something you do not see too often ! ARMA has covered some interesting variants including Finnish & Romanian flown aircraft & I will be attempting to get some of these in shortly.

I will leave you with a link to a very decent review on a Polish blog that should give you a more than fair understanding of what you are getting for your hard earned dollars. Polish modelers can be overly critical, sometimes painful to read as they can be so demanding, especially when the subject is a Polish flown aircraft, but this review is quite good. Make sure you hit 'translate to english' or you'll be reading it in the mother tongue. Aww- don't be shy- learning the Polish language is nowhere near as bad as learning Czech! [ don't get me started on Finnish or Estonian !].

The Sea Hurricane Mk IA was a Hurricane Mk I modified by General Aircraft Limited. They were modified to be carried by CAM ships (catapult armed merchantman). These were cargo ships equipped with a catapult for launching an aircraft, but without facilities to recover them. Thus, if the aircraft were not in range of a land base, pilots were forced to bail out and be picked up by the ship. They were informally known as "Hurricats".
The majority of the aircraft modified had suffered wear-and-tear from serving with front-line squadrons, so much so that at least one example used during trials broke up under the stress of a catapult launching. A total of 50 aircraft were converted from Hurricane Mk Is. CAM launched Hurricanes were used on eight operational sorties and the Hurricanes shot down six enemy aircraft, for the loss of one Hurricane pilot killed.[11] The first Sea Hurricane IA kill was an Fw 200C Condor, shot down on 2 August 1941.