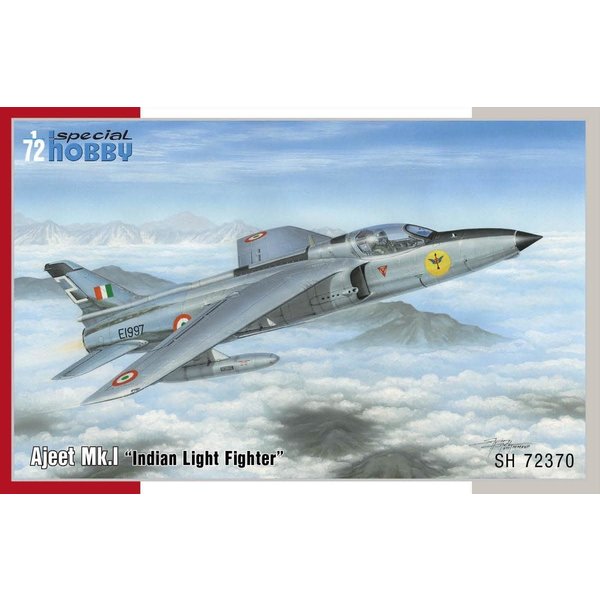 Ajeet Mk.I "Indian Light Fighter" In 1950, WE Petter, who was famous for designs such as the Lysander, Whirlwind and Canberra joined Folland company. By this time modern jet aircraft were becoming bigger, more complex and expensive as their performance increased and as a result the development and operating costs were rising too. WE Petter decided to pursue a different approach to the modern jet-fighter philosophy by designing a light-weight fighter aircraft which was to have been powered by a pair of low thrust turbojet engines although this was later changed to a single power unit as their power output of jet engines increased. By choosing to build this new jet aircraft to the smallest overall dimensions possible and with only the very basic equipment required for the job this kept the total overall price down to only a third of the price of a standard jet fighter bomber of the day yet it would offer similar performance to these much bigger and more expensive jets. The initial design incorporated a pilot lying in a prone position in the nose of the aircraft and a twin engined configuration which was used in the Fo.139 Midge test aircraft which had been designed and built to assess the aerodynamical features of the future Gnat.
The Air Ministry ordered six trials aircraft off the drawing board during March 1955 all of which were delivered by 1956 and they underwent a very thorough set of flight tests, during which the design displayed excellent performance. The Gnat was found to be capable of high sub-sonic speeds, it was exceptionally manoeuvrable at high altitudes and due to its low weight and powerful engine the acceleration was phenomenal.
Two countries, Finland and India, found the results of these trials so very interesting that they decided to acquire the type for their air forces. Finland ordered twelve aircraft, ten of which were in a standard fighter configuration while two machines were adapted to carry out reconnaissance missions with cameras fitted in their nose. India acquired twenty-five complete machines of British origin while another twenty were provided in kit form to be assembled in India by HAL and HAL also acquired a licence to manufacture the Gnat in India. The Indian production line turned out at least one hundred and ninety-five airframe although the last two Indian Gnats were in fact prototypes of the improved Ajeet Mk.I version. Production of this improved design began in 1976 and reached a total of seventy-nine Ajeets, with another ten Ajeets being created using modified Gnat airframes.
While the Finnish Gnats protected the neutrality status of their country, the Indian machines took part in hot conflict during the Indo-Pakistani War of 1965. Rather surprisingly, they became the most effective combat type of this war as they were capable of not only out-manoeuvring the F-86 Sabre but also the more modern and much faster F-104A Starfighter. Due to their diminutive size and excellent manoeuvrability, the tiny Gnat was able to "shake-off" Sidewinder air-to-air missiles and it was also very hard for Pakistani fighter pilots to catch a sight of, let alone shoot down. Indian Gnats also proved just as successful during the later conflict against Pakistan which ended in 1971. The improved Ajeet remained in Indian service long after the Gnat was retired and these served until at least 1991.

The Gnat kit was designed using 3D software, is injected into steel moulding blocks and comes on three sprues of grey styrene and one with clear parts. The kit also provides the modeller with a real plethora of external stores. The decal sheet caters for four Indian machines with colourful markings and interesting history. Several resin sets for this model are also available from CMK, these are: CMQ72237, CMK7332 and CMK7333.
Special Hobby produces also the original British Gnat in two reboxings, SH72137 and SH72322.