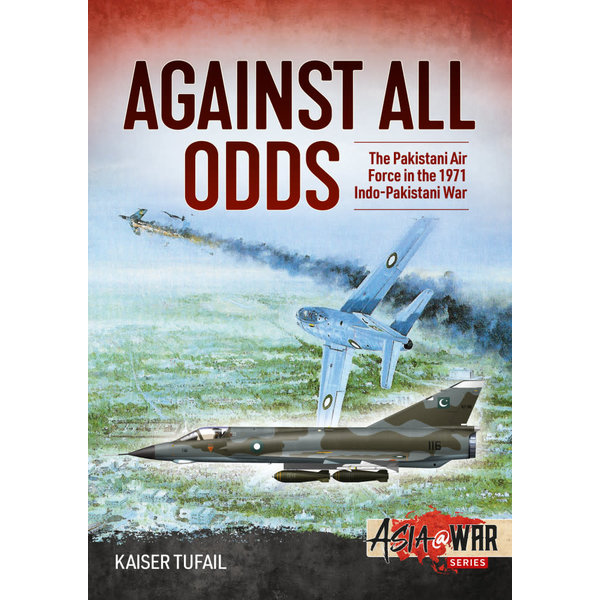 Against All Odds: the Pakistan Air Force in the 1971 Indo-Pakistan War, Helion Asia at War Series #12 softcover

The Indo-Pakistani War of 1971 was a major military confrontation between India and Pakistan. Fought on two fronts of the Indian subcontinent between 3 and 17 December 1971, it pitted two major conventional armed forces in an all-out war over the fate of the former East Pakistan, and resulted in the emergence of a new, independent nation of Bangladesh. In the West, the Pakistan Air Force (PAF) initiated its involvement with an attack on the forward air bases of the Indian Air Force (IAF), on 3 December 1971. A series of major air battles followed over the primary conflict zones. In the East, the small PAF contingent was quickly neutralized by the IAF. When the war ended in West Pakistan on 17 December, PAF was still in the ring and on its feet. It had parried the enemy's blows and had been ever so careful in its offensive responses. It continued to be fixated with remaining viable for providing complete air support to the Army's all-important battle, which flowed out of the overarching dictum, 'defense of the East lies in the West'. PAF's overall performance can be gleaned from the fact that it managed to keep its aircraft attrition rate at par with the IAF. The PAF unmistakably denied a much stronger IAF the distinct possibility of delivering a knock-out punch to it. In the circumstances obtaining, this was a commendable achievement. Against All Odds is richly illustrated with a selection of exclusive photography, more than a dozen authentic color artworks, and a similar number of maps. It provides a unique source of reference for enthusiasts and professionals alike.