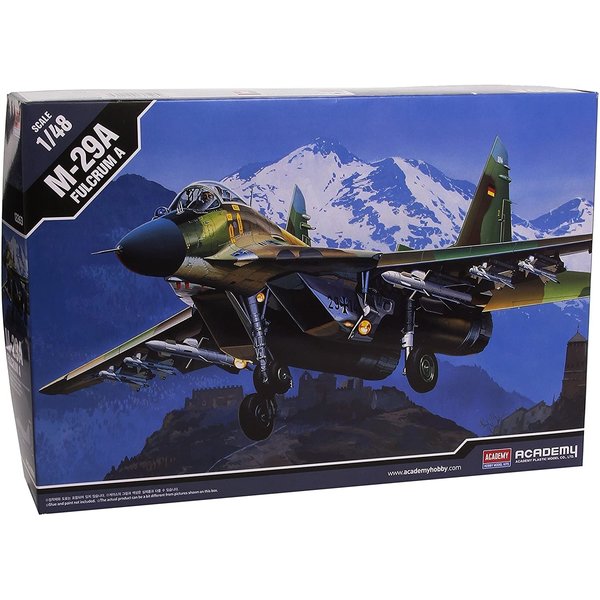 A very reasonable & very successful model kit that has been almost constantly issued in some form since 1993 ! Having satisfied thousands of modelers around the world, it has also taken it's share of criticism from hard core fanatics for various shortcomings & errors that needed to be fixed by serious application of resin, etch or metal parts for complete accuracy ! Yet EDUARD saw fit to borrow this mould twice for it's own use about eight years ago, thus posing the question: Who is correct? EDUARD or the anoraks* ???

GREAT WALL has since issued a family of Mig29 kits that blow away all the competition, yet do so at a price. Currently these kits sell for about $100.00, compared to $24.95 for our little Academy friend right here. Yes, The GREAT WALL kits are utterly superb, but you will spend at least six months of your life putting them together. This little Academy issue goes together without too much of a fuss in about a week & will satisfy most weekend warriors.

There is something to be said in defence of the simpler 'old style' kits which took a couple of days to put together- they provided you with some effortless fun & delivered a completed model in about the time that it took the glue to dry. Today's modern masterworks are so daunting to many beginning modelers that they can actually discourage the modeler from attempting the build ! Some of us are happy to build a model with only 50 or 60 parts-a kit with 650 parts is just going too far, especially with resin & etch parts thrown into the mix. Choose your poison, folks !

*Anoraks- a derogatory English slang word describing hard core fanatics who obsess about obscure details, like the shape of a Spitfire's wing tips on the latest TAMIGAWA model kit, instead of getting on with their lives like the rest of us. These creatures can engage in agonizing online exchanges on various modeling forums without let up or victory and can even be found infesting related fields such as militaria collecting ! Nothing like a group of anoraks arguing bitterly about whether a Rudolf Souval Nazi Iron Cross was made in 1942 or 1962 ! Run to the hills and don't look back !