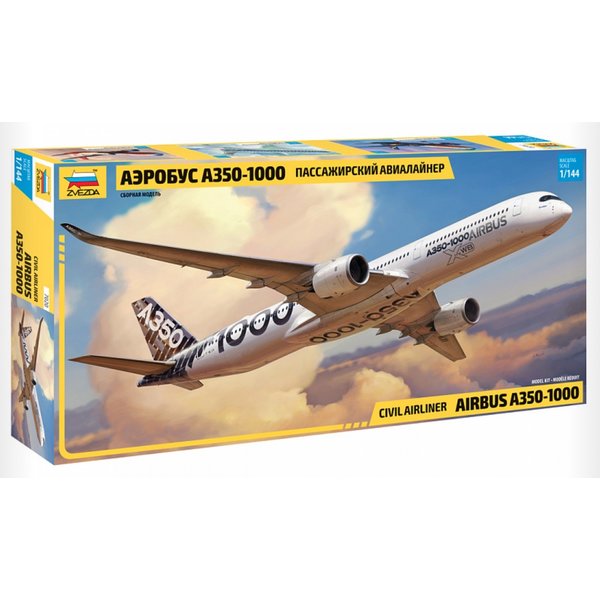 Jaw-dropping, gob-smacking kit of the ultra-modern new airliner, now flying with QATAR, British Airways, Cathay Pacific & others. Outrageously fine mouldings, the engines alone are works of art ! Apparently produced by Zvesda alone, without input from Revell Germany [ who only has an A350-900 available at present ]. Even though this kit is all plastic, it is not a 'slap-together' model- the delicate & fine mouldings demand respect & must be carefully assembled, especially such complex structures as the engines. This is not your Dad's or Grandad's airline model from the 1960's or 1970's which you could slam together in the afternoon & stick a firecracker into the fuselage by the evening ! It is current state of the art & is a thing of beauty. As is normal with Zvesda civil kits, the model comes in either House Colours or Aeroflot .This model has been issued in the markings of the second prototype sporting the famous Airbus 'Carbon Fibre' scheme & has been produced as two decal sheets. Aeroflot has not yet ordered A350-1000's, having ordered 22 x A350-900's instead. A nice touch is a stand for the model, something we don't see too much nowadays.Thoroughly recommended !