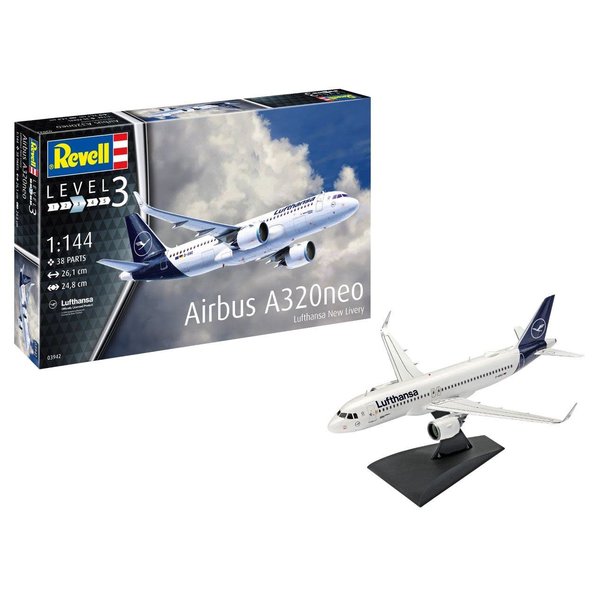 Another outstanding model kit of an important modern airliner by Revell Germany, as expected, in the new Lufthansa livery. This is an all new tool, not based on any preceding model. Puzzling is the fact that Revell has chosen not to include any landing gear with the kit, possibly to entice new modelers into the hobby with a less fiddly build, or maybe this mould will serve another purpose in the future, yet to be revealed ? There is a nice stand included, which thus will be very useful as the model can only be built 'in flight'.

The mould itself is state of the art, with a tiny cockpit & fully detailed Pratt & Whitney PW1000G engines, as optioned by Lufthansa on their A320neo's. Decals are once again designed by DACO of Belgium & printed in Italy by CARTOGRAF, leaving nothing to the imagination as most visible details are supplied !

Recommended to all airliner enthusiasts. It has been said, that if gear is truly desired, the set that comes with the Revell A321 kit should fit this model, although the main wheels will be a tich too large. I would not recommend cross kitting if you are inexperienced, but the seasoned fanatic is well able to accomplish anything when the need arises !