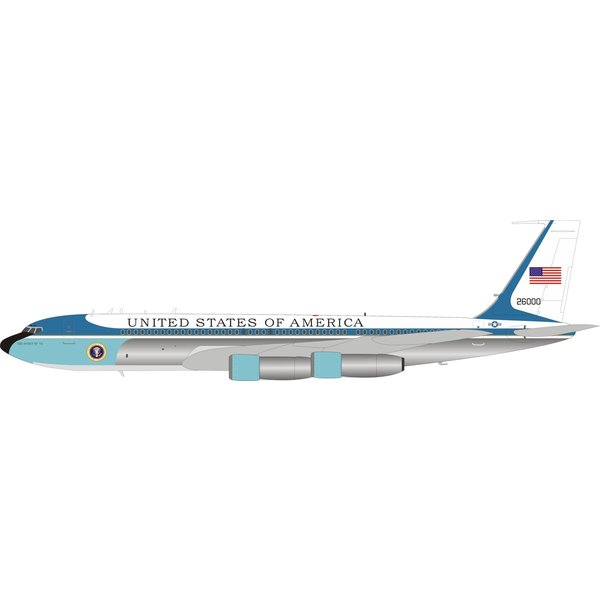 Upon the inauguration of Richard Nixon in 1969, SAM 26000 underwent repairs and upgrades. Nixon and his staff were offered a key role in the redesigning of the plane, a position they took up, and indeed, the finished plane reflected the new president's persona. The interior of the plane was stripped from the nose to the tail; all minor problems were taken care of; upgrades were made on the flight management system; communications gear was slightly modified. Richard Nixon had the interior of the plane redesigned to suit his fancy. Nixon did away with the open floor plan of the Johnson era and replaced it with a three-room suite for himself and his family, serving as a combination of lounge, office, and bedrooms. Accommodations for guests, aides, security and media personnel were located aft of the three rooms.

Although SAM 27000 took over as the primary presidential aircraft in 1972, Nixon's family preferred SAM 26000 because its interior configuration allowed greater privacy for the First Family. Nixon also had the name "The Spirit of '76" applied to the nose of both VC-137Cs stenciled near the nose to honor the country's upcoming 200th Anniversary which was to occur during the last year of his anticipated second term in office. The Nixon’s flew on SAM 26000 to China in 1972, becoming the first American President and First Lady to visit that nation. SAM 26000 was also used by National Security Advisor Henry Kissinger during his secret meetings with the French to negotiate the Vietnam peace process. In December 1972, SAM 27000 took over as the primary presidential plane. In 1977 President Carter had The Spirit of ’76 removed from both aircraft.

NOTE: Inflight 200, J-Fox and B-Models announcements can take up to a year or more for delivery. Due to this time lag, Fluctuations in exchange rate may necessitate price changes, up or down. Due to uncertainty regarding pricing and actual release date, we cannot take prepaid orders online. However you may contact us via email [email protected], or telephone at 1-800-668-1987 to reserve your copy.

Established in 2001, Inflight200 is the first premium quality manufacturer of diecast 1:200 scale aircraft models. Inflight200 has set many standards of production in this scale, using high tech tampo printing to produce exquisite detail and they are continually striving to make more accurate releases. InFlight 200 models are all limited edition, made with all metal die-cast parts and feature antenna, scale landing gear with rubber tires that roll, spinning jet engine fans, and come with an attractive display stand. InFlight 200 models are licensed by aircraft manufacturers (such as The Boeing Company) and major airlines around the world.