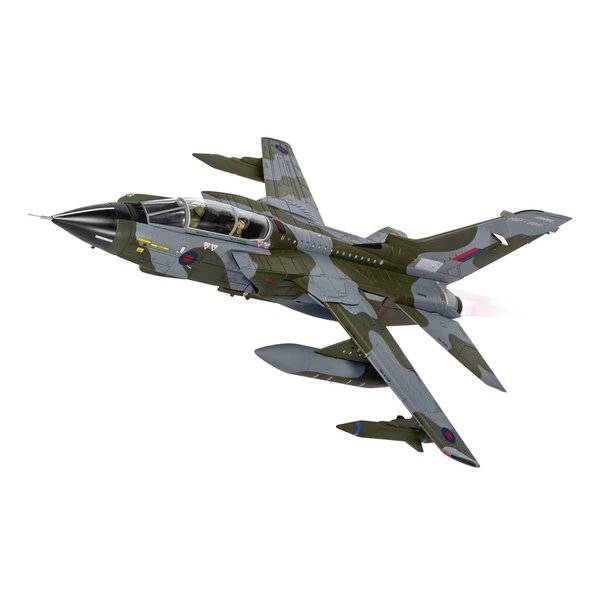 In the year which followed commemorations to mark the centenary of the Royal Air Force, one of the most important aircraft since the end of the Second World War was finally withdrawn from service, after providing the backbone of Britain’s aerial strike capability for almost 40 years. Indeed, as if to underline the effectiveness of this magnificent aircraft, eight aircraft which had been on overseas deployment at RAF Akrotiri, only returned to Marham in the days leading up to the aircraft’s retirement.

Thankfully, RAF personnel who were privileged to be the final custodians of the Tornado in the final days of its service career were in no mood to let the aircraft slip away quietly and ensured that the ‘Mighty Fin’ enjoyed a send-off befitting an aircraft of this stature. Three aircraft were presented in special schemes to mark the end of RAF Tornado operations, including GR.4 ZG752, which was given a striking wrap around retro camouflage scheme, similar to the markings applied to the first RAF GR.1 Tornado aircraft which entered service back in 1982.

The tail of the aircraft carries the markings ‘Tornado GR 1982 – 2009’ and its spine proudly displays all the badges of the RAF squadrons, reserve units and training establishments which operated the Tornado during a service career which lasted almost 40 years. As the RAF said farewell to their most effective strike jet, RAF Marham ensured that its impressive service legacy was commemorated in some style.

As the retirement date for the RAF’s last remaining Panavia Tornados approached, base personnel at RAF Marham announced ambitious plans to allow as many people as possible across the UK to say their final farewell to this hard working and extremely effective strike jet. In scenes which were reminiscent of the last flying Avro Vulcan’s national farewell tour in 2015, a trio of Tornados flew three different routes on three consecutive days, overflying RAF stations and locations associated with Tornado during its long service career, with many thousands of people taking the opportunity to take one last look at an aircraft which had served the Royal Air Force so well for almost 40 years.

For thousands of aviation enthusiasts gathered in a field next to RAF Marham though, Thursday 28th February 2019 will be the date they remember as the ultimate tribute to RAF Tornado service, when 11 of the remaining 15 jets took to the air to perform one final massed formation flypast. Officially arranged to mark a course completion ceremony at RAF Collage Cranwell, a perfect diamond nine of Tornado GR.4 strike jets returned to Marham, making three impeccable formation passes over an airfield which will always be linked with RAF Tornado operations. As the aircraft landed back at Marham, the RAFs last remaining Tornados had effectively been retired, but not before their crews had played their part in a spectacular tribute to the ‘Mighty Fin’.