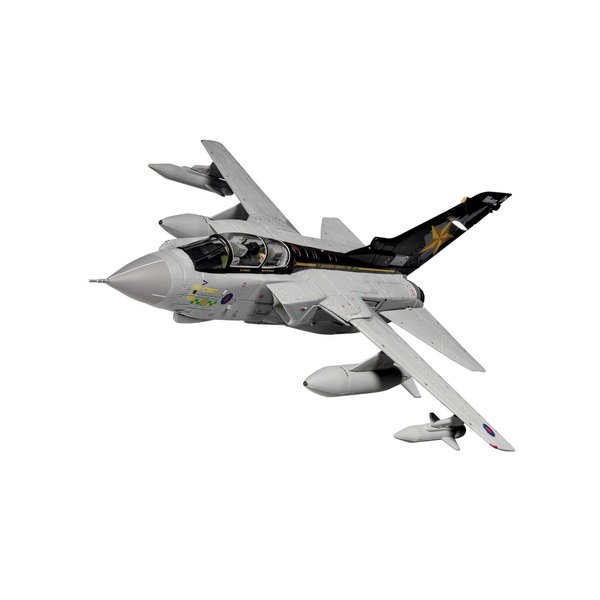 Having the distinction of being one of final two RAF squadron's to operate the Panavia Tornado, No.31 squadron were determined not to allow their long association with this exceptional aircraft go unheralded. During November 2018, Tornado GR.4 ZD716 emerged from the paint shop at RAF Marham wearing a distinctive new disbandment scheme, which marked 35 years of Tornado operations for the squadron and featured the silhouette of a Tornado on the tail of the aircraft, with the unit's famous 'Goldstar' emblem placed on top of it. The black spine of the aircraft also carries the wording '31 Squadron Tornado 1984-2019' and marks 35 years of Tornado operation, initially from bases in Germany, right up until the final days at RAF Marham. The gold star, which appears on the squadron's crest is a representation of the 'Star of India' and marks No.31 Squadron's heritage as the first military unit to fly in India. Tornado ZD716 would go on to undertake a series of high profile national flypasts and official RAF events during the final months of the Tornados service career, helping to give this Cold War warrior the fitting send-off it deserved. This scale representation of the aircraft is taking its place in the Aviation Achieve range alongside the other two specially presented disbandment Tornado models (AA33619 and AA33620) released earlier this year, with the trio making a fitting diecast tribute to an aircraft which served the Royal Air Force with such distinction. Even though the ground attack/reconnaissance variant of the Panavia Tornado was charged with performing some of the most demanding roles carried out by Royal Air Force aircraft, often acting as either an aviation peacekeeper, or hard hitting enforcer, the announcement of the aircraft's impeding withdrawal at the beginning of 2019 was greeted with an outpouring of affection by aviation enthusiasts, in addition to aircrew past and present. Thankfully, the last two squadrons operating these hard working aircraft were allowed to mark the final few months of RAF Tornado operation in some style, which included presenting no fewer than three of the remaining aircraft in special commemorative schemes and allowing them to undertake a national farewell tour. With three aircraft flying three different routes on three consecutive days, the formation overflew RAF stations and locations associated with the Tornado during its long service career, with many thousands of people lining the route to catch one last look at this aviation classic. Unfortunately, due to aircraft serviceability issues, these flights were not undertaken by all three of the specially presented aircraft at the same time, however, a previously arranged RAF photoshoot featuring the illustrious Tornado trio produced a series of iconic images, which will help to commemorate almost 40 years of exceptional service by this aircraft.