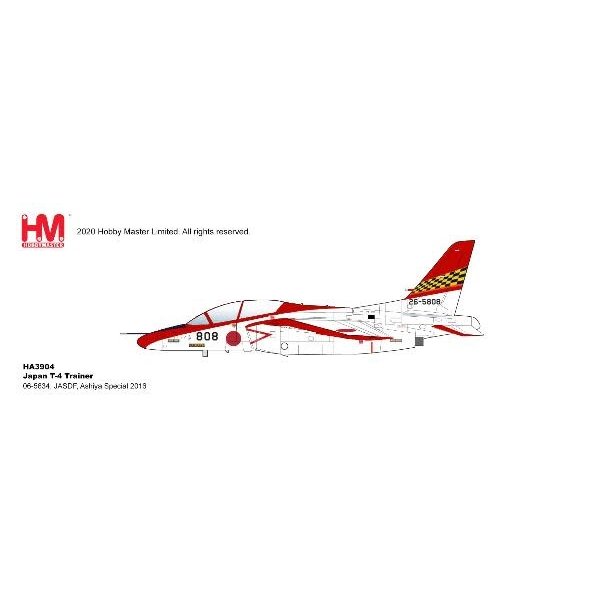 The Kawasaki T-4 is a subsonic intermediate jet trainer used by the JASDF. In
November 1981 Kawasaki was awarded the contract to produce 220 T-4s with the
actual final production number being 212. The aircraft was designed to replace the
Lockheed T-33 and Fuji T-1. The first prototype flew on July 29, 1985 with the first
production aircraft flying in June 1988 and delivery of the first T-4 to the 31st and 32nd Flying Training Squadrons, 1st Air Wing 3 months later.


The Japan T-4 Trainer 26-5808 was built in 2002 c/n 1208 is assigned to the 32nd TSQ (Training Squadron / 1st Air Wing) at JASDF Hamamatsu AB. First established in 1925 Hamamatsu became a flight training school in 1952.  Japan has two Training squadrons located at Hamamatsu, the 31st named Blue Dolphin and the 32nd named Red Dolphin. The dolphin is a reference to a mythical dolphin like creature called Shachihoko so these squadrons have adopted it as part of their emblem and squadron names.’