A4 Skyhawk: Walk Around #41 Softcover by Squadron 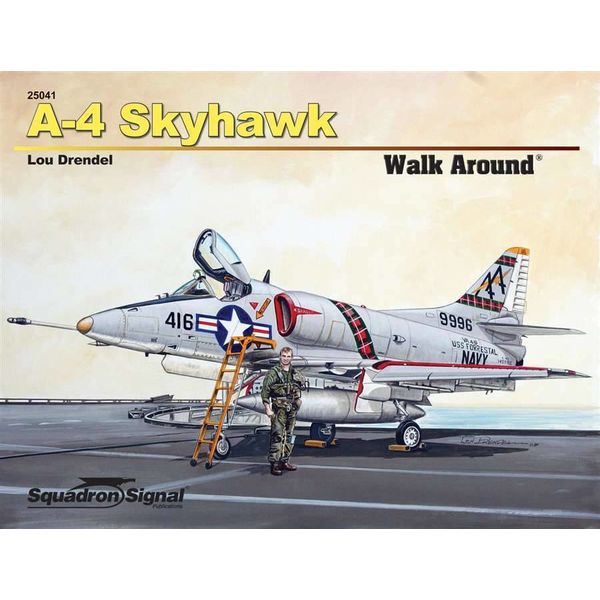 A-4 Skyhawk Walk Around. Book by Lou Drendel. Squadron Signal Publications. The carrier-capable Douglas A-4 Skyhawk is one of the most successful modern combat aircraft. During the 25 years in which the A-4 was on the production line, 2,960 Skyhawks were built. A relatively light aircraft, with a maximum takeoff weight of 24,500 pounds and with a top speed exceeding 600 mph, the Skyhawk was operated not only by the US Navy and Marines but also by the air forces of Australia, New Zealand, Israel, Malaysia, Argentina, Singapore, Brazil, Indonesia, and Kuwait. Introduced in 1956, Skyhawks played major roles in the Vietnam War, the 1973 Arab-Israeli October War, and the Falklands/Malvinas Conflict in 1982. With a reputation for toughness and agility, Skyhawks remained a part of the American arsenal for nearly half a century - the U.S.  Navy retired the A-4 as recently as 2003. Meanwhile, the battle-tested warrior continues to serve today other militaries around the world. Illustrated with 205 photographs, color profiles, and detailed line drawings; 80 pages.