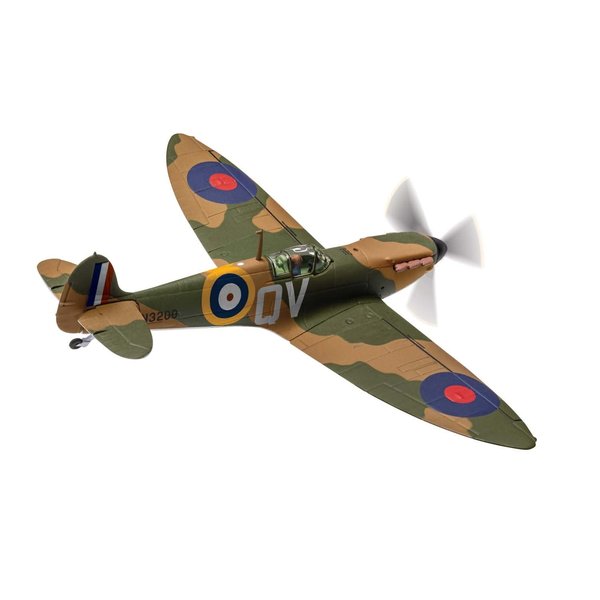 Supermarine Spitfire Mk.1a N3200 was constructed at the Vickers Armstrong works at Eastleigh, near Southampton during 1939 and delivered to RAF No.19 Squadron at Duxford in April the following year. Wearing the codes QV and the distinctive black and white underside recognition markings synonymous with RAF fighters of the day, the aircraft embarked on its first operational sortie from Duxford on 27thMay 1940, in the hands of Squadron Leader Geoffrey Stephenson, as part of the significant RAF response to the emergency situation at Dunkirk and the evacuation of the stranded British Expeditionary Force. During a day of savage dogfighting, Stephenson managed to down a Luftwaffe Stuka, before his Spitfire sustained damage to its engine, causing it to seize almost immediately.

He managed to successfully land his aircraft on a beach at Sangatte, to the west of Calais and was able to exit the downed fighter without sustaining injury but was captured by German forces. The Spitfire lay damaged and partly buried in the sand and became something of an attraction for German troops stationed in the area, with many posing for pictures with the vanquished British fighter. The Spitfire disappeared beneath the shifting sands, but not before she had been stripped of many parts by souvenir hunters. The notoriously shifting sands on the beach at Sangatte held on to their wartime Spitfire secret for many years after the end of WWII, lost from sight and just a distant memory for those who were aware of its story. Following a particularly violent storm in 1986, the parts of the Spitfire wreckage became visible once more, attracting plenty of local interest and resulting in plans being drawn up for a recovery operation. Later that same year, the remains of Supermarine Spitfire Mk.1a N3200 were removed from the beach and displayed in a French military museum, as recovered, where it would remain for the next ten years.

Attracted by the provenance of this famous Spitfire and having seen wartime photographs of it lying in a forlorn state on the beach at Sangatte, it was acquired by a UK based group in 2000 and earmarked for restoration. Once returned to the UK, this complex and lengthy restoration would be placed in the capable hands of Historic Flying Limited and in March 2014, marking the end of an ambitious 14 year project, Spitfire N3200 took to the skies once more. To add even more significance to this occasion, her first post restoration flight took place at Duxford airfield, the same airfield it had operated from some 74 years earlier, whilst embarking on its first fateful combat mission.