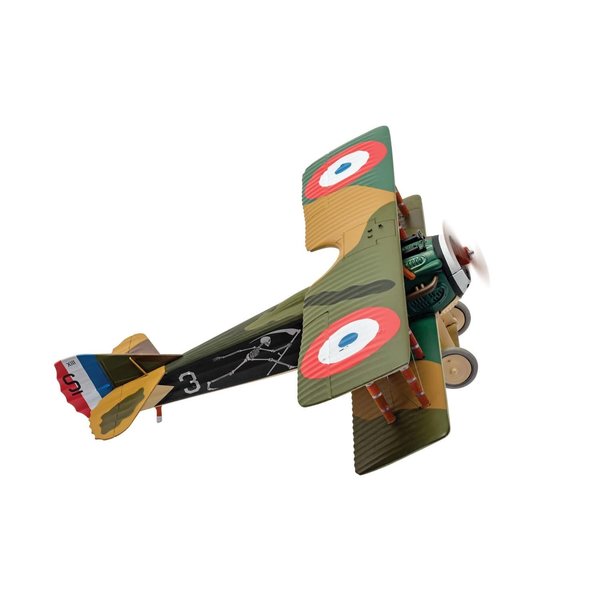 Only sixteen years of ageat the start of WWII, Pierre Marinovitch made no secret of his desire to do his duty and fight for his country. Still only seventeen, he enlisted in the27e Régiment de Dragoons,only to quickly change his mind and apply for pilot training, successfully gaining his wings in the spring of 1917.

Following a period of illness, he was assigned to Escadrille Spa 94 'The Reapers' and by the end of 1917 already had three aerial victories to his name. Known as 'Marino' to his squadron mates, his flying style was not liked by all, with some questioning his flying ability and simply describing him as a good shot, however, nobody could doubt his bravery and aggression in the air.

As his victory tally continued to rise, he also aroused the attention of the French press, desperate to find heroes with which to inspire a population scarred by war and who proclaimed Marinovitch to be 'The youngest ace', by virtue of his tender years. Throughout the rest of 1918, 'Marino's' victory tally would continue to rise and by the end of hostilities, he had at least 21 aerial victories to his name, the highest scoring ace in his squadron and the 12th ranking French ace of the war.

Continuing to fly after the war, Marinovitch was tragically killed in a flying accident on 2nd October 1919, only weeks after celebrating his 21st birthday. With the emergence of the aeroplane as an essential weapon of war during the savage fighting of the Great War, many of the world's early aviators chose to embellish their aircraft with flamboyant paint schemes and distinctive markings, which seemed rather appropriate for these knights of the air.

Many of these emblems may have had their origins in the heraldic symbols of the past, or simply represent an individual pilot's desire to stand out from the crowd, however, they quickly became an invaluable recognition aid for fellow pilots during the melee of a swirling dogfight. More readily associated with airmen of the Central Powers, one of the most distinctive markings adopted by an Allied unit during WWI was the 'Grim Reaper' carried by the fighters of Escadrille Spa 94 of the French Air Service, a particularly sinister sight in the skies above the trenches.

This certainly proved to be the case during the last year of the war, as the excellent Spad fighters flown by French and American airmen began to take a heavy toll of Luftstreitkrafte aircraft. Young French airman Pierre Marinovitch gained his 'Ace' status on 19th January 1918, with the shared destruction of Jasta 19 Albatros D.V 2111/17, flown by Martin Mallmann, north of Manre-Beine – interestingly, he shared the victory with American volunteer pilot Austen Ballard Crehore, Marinovitch's best friend and regular flying partner.