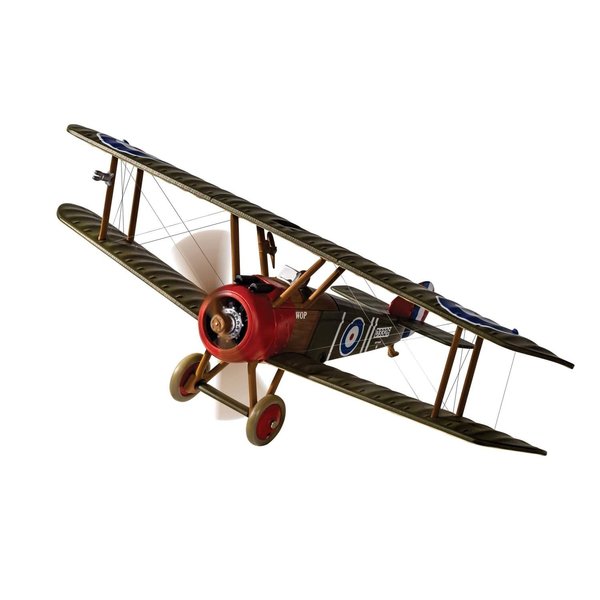 As he climbed into the cockpit of his Sopwith Camel fighter at Bertangles aerodrome on 21st April 1918, Canadian Wilfred Reid 'Wop' May had no idea that this would be the most significant day in his life. Embarking on only his second mission over the Western Front, he had been instructed by his Flight Commander, the ace pilot Captain Roy Brown, to avoid combat if they encountered the enemy, simply to gain height and make for home. Over the River Somme, No.209 Sqn encountered several Fokker Dr.1s of von Richthofen's Flying Circus and dived to attack – as instructed, May stayed at altitude, but when an enemy Triplane passed close by, he saw the chance of an easy victory. Misjudging his attack, he overshot the enemy aircraft and by the time he had regained his bearings, his Camel began taking bullet strikes on its wings – the novice hunter had become the hunted. His opponent was clearly an experienced pilot and May could not shake him from his tail - his only chance of survival was to dive for the ground and try to make it over Allied lines, hoping his enemy would not follow.

What he did not know was that he was being chased by the distinctive red Fokker Triplane of Manfred von Richthofen, the greatest air ace the world had ever known. Failing in his attempt to gain his first aerial victory, Wilfred 'Wop' May was now in a fight for his life, as he unwittingly struggled to avoid becoming the 81st victory of Manfred von Richthofen. With his guns jammed and unable to shake the German airman off his tail, May flew at tree-top height, almost hitting the steeple of Vaux-sur-Somme church, as he attempted to reach the potential safety of Allied lines. Displaying exceptional airmanship, his pursuer stayed on his tail, however, despite firing off the odd round, appeared to be having gun problems of his own. The chase had attracted the attention of Allied ace Roy Brown, who attacked the Triplane, but due to the speed and low altitude of the chase, was only able to fire a few bursts of deflection shot. Just as it seemed as if May would either hit the ground or appear large in the Triplane's gunsight, the German aircraft reared up and immediately attempted to make a forced landing in a nearby beet field, ripping the undercarriage off on the rough ground. Mortally wounded, Manfred von Richthofen shut down the engine of his machine and cut off the fuel, before dying at the controls of his aircraft, the result of a single bullet wound. This historic victory was initially attributed (although not claimed) to Captain Roy Brown, however, subsequent research revealed that the fatal shot to von Richthofen's chest was most likely fired from an Australian machine gun position on the Morlancourt Ridge.