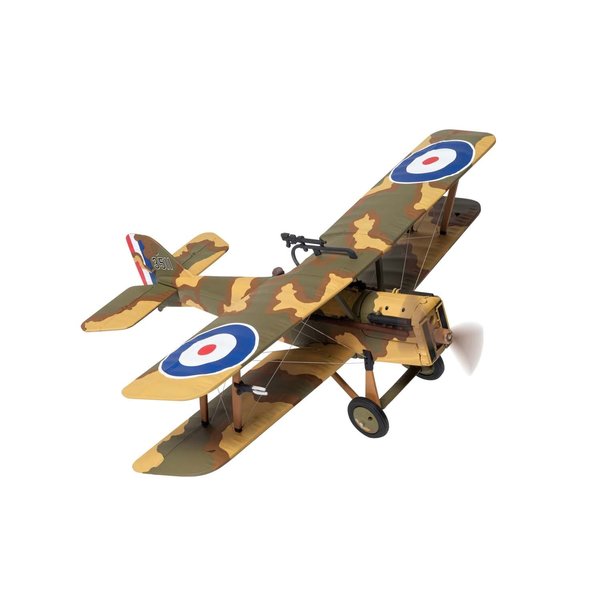 Trading the rural tranquillity of Esk, Queensland for the savage airborne battles above the Western Front, Roderic Stanley Dallas worked in a mine in order to earn money to finance passage to England and dreams of becoming an airman. Accepted for training with the Royal Naval Air Service in 1915, Dallas excelled in both the classroom and in the air and on gaining his pilot's licence, he was posted to No.1 Squadron RNAS, initially flying the Sopwith Pup. His first aerial victory came in May 1916 and from that date, his score began to increase rapidly, as he earned a reputation as a fearless dogfighter, but one who did not take unnecessary risks – he also relished the extremely risky low level missions which many of his fellow pilots avoided and suffered several injuries whilst engaged in such sorties.

By the time he was appointed commander of No.40 Squadron RFC in March 1918, Dallas has at least 30 victories to his name and traded his Sopwith fighter for the Royal Aircraft Factory SE5a, an aircraft in which he would go on to score a further nine victories. Unusually, his aircraft was one of a handful of SE5a fighters which were given an experimental camouflage finish, thought to have been trialled on aircraft engaged in ground strafing operations. Australian Great War ace 'Stan' Dallas was officially credited with 39 aerial victories, which places him as the second most successful Australian ace of WWI, behind the 47 victories of Robert A Little. Post war research later revealed that due to the fact Dallas had a somewhat casual attitude to claiming victories, his actual total may have exceeded 50 victories, which would have seen him earning the title of 'Australia's most successful fighter ace'.

A careful student of aerial fighting tactics, Dallas also earned a reputation as something of a prankster, a character trait which was clearly illustrated by an incident which is alleged to have taken place in early May 1918. During a lull in the fighting around Flanders, Dallas 'shot up' a German aerodrome in the sector, before dropping a pair of boots on the airfield – the attached message read, 'if you are not going to come up and fight, your pilots might need these for their ground work'. Circling in the distant mist, he waited until troops came out to inspect the package, before returning to drop a couple of small bombs and to use up the rest of his ammunition. Although the flight was unauthorised, reports of the incident were thought to have caused great amusement amongst the most senior members of Allied military high command.