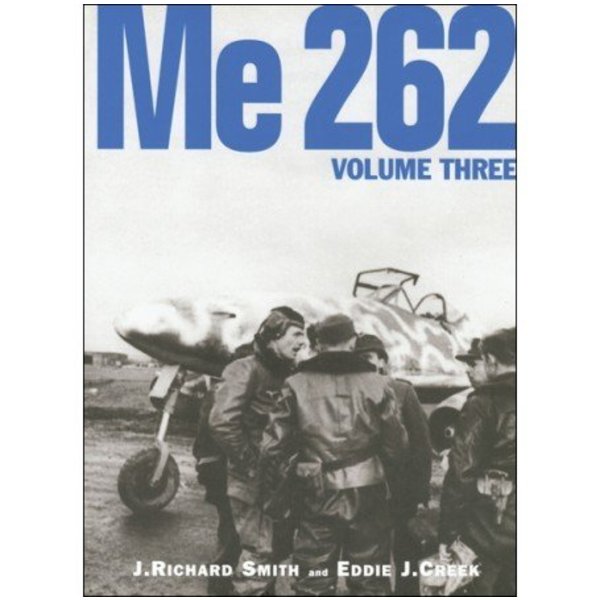 This reprint of Me 262 Volume Three continues J. Richard Smith and Eddie J. Creek's detailed analysis of the world's first operational jet fighter and fighter-bomber. This book covers the night war waged by the Me 262 against the threat of the British Mosquito over Berlin in 1945: "I had caught a Mosquito illuminated in the searchlights at about 8,500 meters. However, because I had not managed to maneuver my Me 262 into the proper position, the rapid closing speed forced me to break off before I could finish my attack. With a top speed of 850 km/h, I was much faster than the Mosquito in front of me. I contacted the fighter controller by radio, asking him to keep the Mosquito illuminated. Then, I tried making a full turn to keep the enemy aircraft at the correct distance for a second attack."

Also included is a day-by-day account of the Me 262's role in the daylight defense of the Third Reich. The authors have drawn extensively from the personal accounts of both German and Allied pilots as well as thousands of archive documents: "These guys came up so fast that we never knew what hit us. My aircraft was badly hit in the engine and port wing by cannon shells, and I was about to bail out when it seemed that the aircraft was still flyable. Lt. Florine's P-38 was not hit and he spent the next few minutes keeping the two jets off my back by diving into them each time they tried to close and finish me. Like my aircraft, his was unarmed. There is little doubt that he risked his own life to save mine." Following more than 30 years of research, Me 262 Volume Three forms part of the most comprehensive account of the Luftwaffe's revolutionary jet fighter ever published.