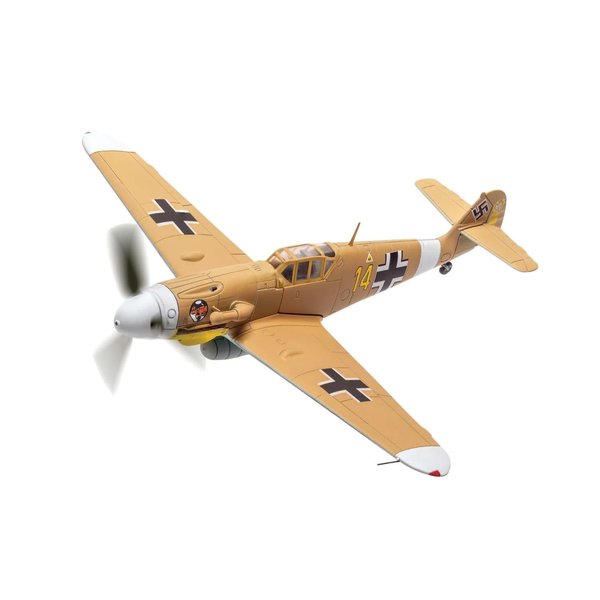 Regarded by many of his contemporaries as the most naturally gifted fighter pilot ever to take to the air, Hans Joachim Marseille would make the clear blue skies of North Africa his hunting ground and the Messerschmitt Bf 109 fighter ‘Yellow 14’ his feared mount. Claiming 158 victories from 382 sorties flown, 151 of these were scored over the deserts of North Africa, making him the top scoring Luftwaffe ace in the Mediterranean theatre, gaining more victories against Western Allied airmen than any other pilot. Tragically, as was the case with so many of the young men who fought during WWII, the ‘Star of Africa’would not survive the conflict and indeed would not live to see his 23rd birthday.

On 30thSeptember 1942, Marseille was leading his Squadron on a mission to support a flight of Stukas when his new Messerschmitt Bf 109G-2 fighter developed engine problems. With the cockpit filling with noxious fumes and unable to see out of the canopy, he relied on his wingman to guide him over friendly lines, before he could attempt to bale out. Once over German held territory, with the effects of smoke inhalation now causing disorientation, he turned the fighter on its back and rolled out of the cockpit. With the aircraft now adopting a nose down attitude, Marseille struck the tail of the Messerschmitt, probably killing him instantly and sending his lifeless body tumbling to the desert floor – the‘Star of Africa’had fallen.

A significant turning point in the career of Hans Joachim Marseille occurred in early 1941 when he was posted to North Africa, well away from distractions which had previously brought him so much trouble, now coming under the guidance of Commander Eduard Neumann. Neumann saw something special in Marseille and encouraged him to train himself to be a better fighter pilot and realize his combat potential - his style of man management seemed to suit Marseille, who began a regime of physical exercise and careful diet, strengthening his legs and abdominal muscles to better withstand the forces impost on a pilot during dogfighting. Unlike many of the other pilots of JG27, Marseille would never wear sunglasses during sorties, as he wanted his eyes to become accustomed to the harsh lighting in the desert. Significantly, he began to take a keen interest in his aircraft, preferring to spend much of his free time with his crew chief, or studying the art of deflection shooting, ensuring that he was better prepared for his next meeting with the enemy. With ever increasing regularity, these meetings would result in Marseille recording more victories and displaying exceptional flying ability and split second tactical awareness in the process – the ‘Star of Africa’ was beginning to shine.

The death of Hans Joachim Marseille was a terrible blow for the pilots of JG27 and indeed the entire German nation, who had started to think that the charismatic Marseille was invincible in the air. Facing increasingly superior numbers of Allied fighters in North Africa and with Rommel and his Afrika Corps now very much on the retreat, the Luftwaffe would never regain superiority of these desert skies again and it would not be long before the fighters of Jagdgeschwader 27 were redeployed to Northern France.

Eduard Neumann said of Marseille “As a fighter pilot he was absolutely supreme. Above all, he possessed lightning reflexes and could make a quicker judgement in a bigger orbit than anyone else … Marseille was unique.”

Adolf Galland, himself one of the most celebrated Luftwaffe fighter aces of WWII, described Marseille as "An unrivalled virtuoso among the fighter pilots of World War 2. His achievements had previously been regarded as impossible and they were never excelled by anyone after his death.”