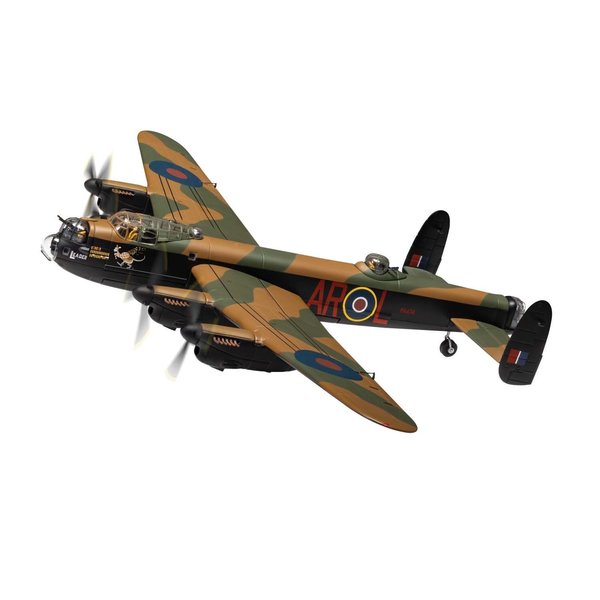 Painted as No.460 Squadron RAAF W5005 AR-L 'Leader' on port side, and No.50 Squadron RAF VN-T, flown by F/O Douglas Millikin DFC on the starboard side
February 2020 announcement, Autumn 2020 delivery starboard side

As arguably the best loved historic aircraft in Britain today, Avro Lancaster B.I PA474 is one of only two airworthy Lancasters in the world and the only one flying in Europe. Operated by the Coningsby based Battle of Britain Memorial Flight, the aircraft serves as a flying memorial to almost 64,000 men of RAF Bomber Command who were either killed or injured during the Second World War and is a highlight act at any event which it displays.

Over the years, the aircraft has been presented in several different wartime schemes, marking the achievements of particular aircraft, aircrews or squadrons and following the completion of its 2016 winter maintenance schedule, it emerged in this attractive scheme which features the markings of two different Lancasters.

The port side wears the markings of W5005 AR-L 'Leader' of No.460 RAAF Squadron, including attractive nose artwork featuring a kangaroo playing the bagpipes, highlighting the international nature of the aircraft's crew. The starboard side carries the codes VN-T, representing a Lancaster of RAF No.50 Squadron, one which was flown by F/O Douglas Millikin DFC on 27 missions of his first tour of operations – F/O Millikin was the grandfather of the Commanding Officer of the Battle of Britain Memorial Flight at the time of the Lancaster's repaint. PA474 was still wearing these popular markings at the end of the 2019 Airshow season.

The original idea of forming a Historic Aircraft Flight of wartime piston engined aircraft began to take shape during 1957 at RAF Biggin Hill, as Wing Commander Peter Thompson DFC had access to one of the last Hawker Hurricanes in RAF service and wanted to preserve the aircraft for the benefit of the nation. Within weeks, the new Flight benefitted from the addition of three former Temperature and Humidity Flight Spitfires from RAF Woodvale and the nucleus of the Battle of Britain Flight was born.

To more accurately reflect the growing commemorative role the Flight was being asked to perform, the name was changed to its current Battle of Britain Memorial Flight and whilst the aircraft it has operated since inception may have changed, the affection in which they are held has increased with each passing year.

In November 1973, the Flight received a huge boost with the arrival of Avro Lancaster B.I PA474, an aircraft which since that date has been continually upgraded to as near wartime configuration as possible.

The aircraft of the Battle of Britain Memorial Flight are regarded as a highlight act at any Airshow at which they display and are in high demand throughout the year, performing a multitude of ceremonial and commemorative duties alongside their many Airshow commitments. Receiving numerous requests to perform flypasts each year, it is not uncommon for the BBMF to undertake several hundred flying appearances during a season, thrilling many millions of spectators and aviation enthusiasts in the process.