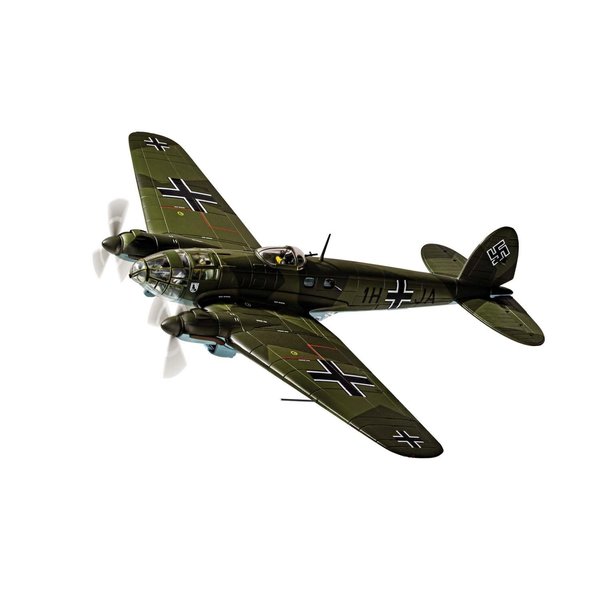 As the four man crew of KG26 Heinkel 1H+JA boarded their aircraft at Westerland airfield on the Island of Sylt on the morning of 20th October 1939, they knew that a long and dangerous sortie lay ahead of them. Their task was to perform a long range armed reconnaissance flight over the Glasgow area and on to photograph gun emplacements and naval vessels in the Firth of Forth, a heavily defended area of Britain. During the sortie, improving weather conditions over Scotland made the Heinkel clearly visible from the ground and as well as coming under fire from anti-aircraft batteries, patrolling Spitfires from Nos 602 and 603 Squadrons were quickly on the scene. Attacking the aircraft from the rear, the Spitfires quickly silenced the intruder's defensive fire, before mounting repeated attacks, peppering the Heinkel's wings and fuselage with .303 machine gun bullets. With the pilot sustaining injury and both of the aircraft's engines damaged, the Heinkel rapidly lost height, with a crash landing the only option available to the two surviving crew members. Striking moorland near the village of Humbie in East Lothian, the aircraft demolished a drystone wall before coming to rest on a slight incline, breaking the Heinkel's back in the process. The aircraft had the notoriety of being the first German aircraft to crash relatively intact on British soil during WWII.