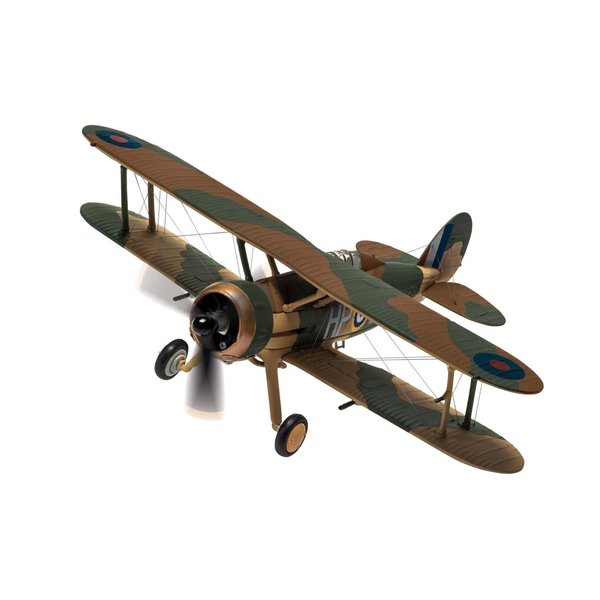 A truly innovative aeroplane, the Gloster Gladiator is often described as the pinnacle of biplane fighter design and was the pride of the Royal Air Force when the first examples were delivered to No.72 Squadron at Tangmere in February 1937. Unfortunately, aviation history dictated that the undoubted qualities possessed by the Gladiator were largely forgotten, particularly as both the Hawker Hurricane and Supermarine Spitfire had both made their first flights by the time of its squadron introduction and indeed the first RAF Hurricanes were delivered later in 1937. During the Battle of France, two squadrons of Gladiators were sent to support the British Expeditionary Force, but suffered badly at the hands of the Luftwaffe, as the age of the fast, monoplane fighter had already arrived. Mainly withdrawn to secondary roles, one RAF squadron did famously use the Gladiator during the Battle of Britain, as they were sent to operate from Roborough airfield, to protect the naval dockyards at Devonport. Wearing the standard Royal Air Force day camouflage scheme of the period, No.247 (China-British) Squadron flew many standing patrols over their assigned area, but did not see actual combat with the Luftwaffe during the battle. On Christmas Eve 1940, the squadron finally traded their Gladiators for new Hawker Hurricane fighters.

With the Gloster Gladiators of RAF No.247 Squadron providing fighter cover for the Devonport dockyards during the Battle of Britain, the unit enabled Fighter Command to deploy its Spitfires and Hurricanes where they were needed most, challenging the Luftwaffe in a desperate struggle for aerial supremacy over southern England. The closest the RAF Gladiators came to actual combat during the battle came on 25th September 1940, when a force of 24 Dornier bombers escorted by 12 Messerschmitt Bf 110 heavy fighters flew across the English Channel, heading for Plymouth. Four of 247 Squadron's Gladiators were sent to intercept the formation, however, Hurricanes from No.601 Squadron Exeter were first on the scene and broke up the raiders formation. The Gladiators did give chase to several of the enemy aircraft, however, they did not have the speed to catch them and returned to base reporting no contact. In 1990, the world famous Shuttleworth Collection marked the 50th anniversary of the Battle of Britain by repainting their unique, airworthy Gloster Gladiator in a distinctive camouflage scheme and operating it on the UK Airshow circuit in this configuration for the next six years. The markings chosen for this tribute were previously worn by Gloster Gladiator Mk.II N2308 HP-B, one of the few Gladiators which flew with No.247 Squadron during the Battle of Britain.