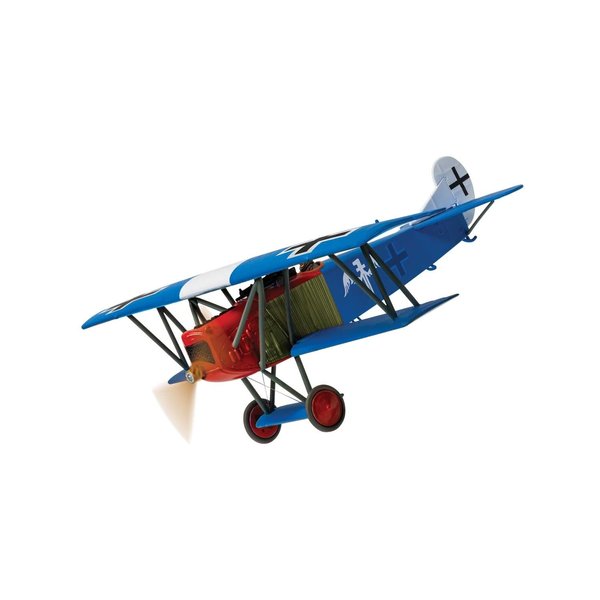 One of the early aviators who helped to establish the importance of military aviation on the battlefield, Rudolf Berthold learnt to fly by paying for his own flying lessons whilst serving in the pre-war Imperial German Army. At the start of the Great War, he was initially sent back to his Army unit for training, but quickly transferred to the Luftstreitkräfte and an initial posting as an aerial observer. By the beginning of 1916, Berthold was at the controls of a Fokker Eindecker and his first aerial victory soon followed – by the end of the year, he would be one of Germany's first air aces, with eight victories to his name.

Serving throughout the Great War, Berthold earned the nickname 'Iron Man' due to the many serious injuries he received during combat, several of which saw him discharging himself from hospital so he could return to his unit. Incredibly, his final sixteen aerial victories were all gained flying the magnificent Fokker D.VII fighter and all whilst flying using just one hand. Injured during combat with SE5a fighters of No.56 Squadron RFC in October 1917, Berthold's right arm was shattered so severely by a bullet which ricocheted into his cockpit, that amputation was seriously considered. Although avoiding such drastic surgery, the injury would trouble Berthold for the rest of his flying career, even though he would end the war with 44 aerial victories. Serving throughout the Great War, the combat flying career of Germany's seventh most successful air ace Rudolf Berthold was interrupted by several lengthy periods of hospitalisation, having suffered some quite serious injuries in the course of executing his duties. As his victory tally continued to rise, his reputation was further enhanced by tales of his bravery and determination to return to the front line, often discharging himself from hospital before he had fully recuperated and only able to continue flying by using strong pain relief.

Celebrated as Germany's flying 'Iron Man', Berthold ended 1917 with a wound so severe that his flying days seemed to be over, but this did not stop him returning to the front line and helping to inspire his fellow pilots, who were by now battling against ever increasing numbers of Allied aircraft. The arrival of the new Fokker D.VII at the airfield saw Berthold taking a quick flight in the capable fighter, returning to remark, 'It is so responsive, I could fly it one handed!' He would go on to do just that over the coming months, using the Fokker D.VII to score a further 16 victories during 1918, bringing his total to 44. Less than two years after the war, Berthold was killed by an angry mob in Hamburg, during a period of civil unrest – his headstone inscription reads 'Honoured by his enemies, slain by his German brethren'. As sad end for one of Germany's leading Great War aces.