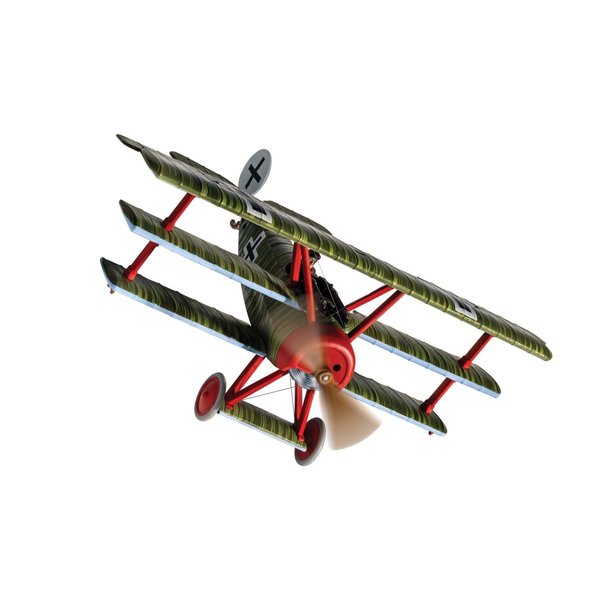 As he prepared for his first combat patrol, novice fighter pilot Wolfram von Richthofen was keen to impress his famous cousin, the famed 'Red Baron'and the flight leader for the mission. Although suffering from fatigue and combat stress, Manfred von Richthofen was the consummate professional and the safety of his fellow airmen was of paramount importance to him.

As the Fokker DR.1 fighters of Jasta 11 climbed away from Cappy aerodrome on 21st April 1918, Wolfram had been given strict instructions to stay out of trouble should the formation encounter the enemy, staying on the periphery of the action and experiencing what the melee of a dogfight looked like.

As his comrades later engaged in combat with the Sopwith Camels of RAF No.209 Squadron, Wolfram did as instructed, but found himself under attack by one of the Camels, which had also been loitering on the edge of the fighting, an aircraft which was flown by the similarly inexperienced Wilfred 'Wop' May.

Taking immediate evasive action, the Camel sped past his Triplane, with the incident attracting the attention of his famous cousin – Manfred von Richthofen pursued the Camel which seemed destined to become his 81st victim. Wolfram von Richthofen would survive the encounter to become a fighter ace in his own right, however, this meeting of two novice pilots over the trenches of the Western Front would ultimately claim the life of the world's most famous airman.

Having just led an attack against two British RE8 reconnaissance aircraft above the Somme battlefield, Manfred von Richthofen re-joined the rest of Jasta 11's Fokker Triplane fighters, in time to lead a further attack against a formation of Sopwith Camels from No.209 Squadron RAF. Displaying all his legendary flying skills, the Red Baron attacked the enemy aircraft, whilst at the same time keeping an eye on his cousin Wolfram, a novice pilot who had been instructed not to engage in combat.

On seeing that one of the Camels had attacked Wolfram's Triplane, he broke away from the dogfight and went to his aid, quickly positioning himself on the tail of the Sopwith fighter. Clearly flown by an inexperienced pilot, the Camel was the mount of young Canadian airman Wilfred 'Wop' May, who realising his error, dived at high speed for the ground and the safety of Allied lines.

Flying perilously close to the ground and narrowly missing the church steeple at Vaux-sur-Somme, May knew that if he pulled up, he would fall to the guns of the ace pilot behind him, but as the high ground of Morlancourt Ridge approached, he had no option.

Miraculously, his aircraft was not peppered with bullets and the Triplane giving chase was seen to rear up and make a forced landing in a nearby field – although he didn't know it at the time, May was being hunted by Manfred von Richthofen and whilst he had managed to escape with his life, the famous Red Baron had not been so fortunate and lay dead in the cockpit of his red Fokker Triplane.