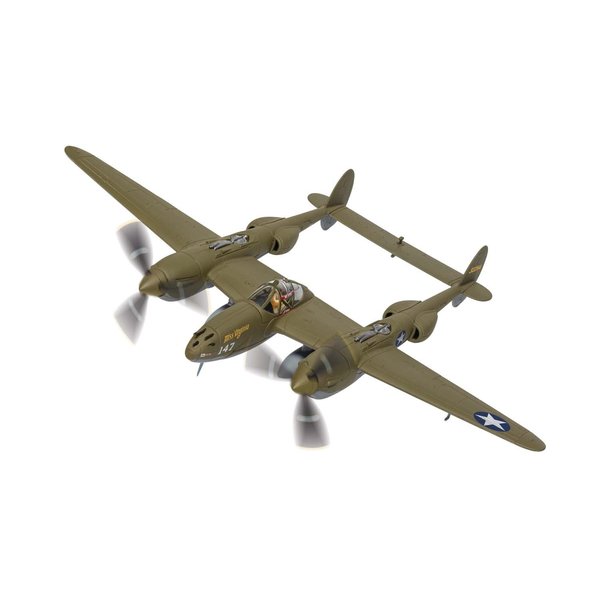 Having been forced to endure the horrors of the surprise Japanese attack at Pearl Harbor, the American people found themselves dragged into a war they had tried so hard to avoid, now determined to avenge this day of infamy. Their long fightback began with victory at the Battle of Midway in June 1942, but for the men of the USAAF 347th Fighter Group, their chance to inflict a huge psychological blow against the Japanese nation and specifically against man who had planned the Pear Harbor attack would come in April the following year. US Navy intelligence code-breakers had been monitoring Japanese communications for months and discovered that Admiral Isoroku Yamamoto planned to fly from Rabul to troops stationed in the Solomon Islands, to boost their morale in the wake of the Midway defeat. Flying in one of two Mitsubishi G4M 'Betty' bombers and protected by six Zero fighters, the formation was intercepted by sixteen US Lockheed P-38G Lightnings, whose pilots had made the long flight from Guadalcanal with one specific aim – vengeance. In the ensuing dogfight, P-38G 'Miss Virginia' piloted by Rex T. Barber, slipped in behind the bomber carrying Admiral Yamamoto and unleashed a torrent of bullets from his .50 calibre machine guns, sending it crashing into the jungle below. 'Operation Vengeance' had been successful and one of America's most deadly enemies had been eliminated. In what proved to be one of the most significant aerial engagements of the Second World War, 'Operation Vengeance' was the ambitious plan to intercept an aircraft carrying Japan's most accomplished military tactician and architect of the Pearl Harbor attack, Isoroku Yamamoto.

The mission was entrusted to brilliant US aviator Major John Mitchell, who would have to plot a course far enough away from islands inhabited by Japanese spotters and low enough to avoid detection by enemy radar, whilst ensuring his fighters intercepted the enemy formation at exactly the right moment. With only a map, his watch and a highly accurate compass borrowed from the US Navy installed in his fighter, the mission had only a slim chance of success, but was a risk they had to take. The only aircraft capable of undertaking this perilous 1000 mile round trip was the Lockheed P-38 Lightning and even then only by using drop tanks containing additional fuel – indeed, due to short supply, each aircraft was fitted with a single large 330 gallon drop tank, as well as a smaller 150 gallon tank. As the sixteen Lightnings took off from Kukum Field, Guadalcanal at 7am on 18th April 1943, they had no idea of the size of the enemy force they would be facing, or if indeed they would manage to intercept them. In a feat of exceptional airmanship, the Lightnings arrived at the anticipated interception point just one minute behind schedule and to a shout of 'Bandits' from one of the American pilots. In the ensuing dogfight, 'Operation Vengeance' would strike a huge blow in the fortunes of the Pacific War and highlight that America would accept nothing less than total victory.