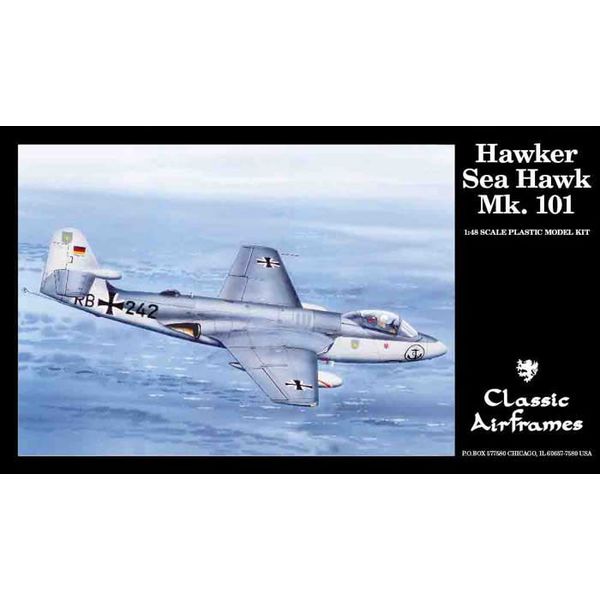 By 2004, many models produced by the short run market had evolved into things of stunning beauty and began to rival the quality of models issued by the mainstream. Due to their production methods however, they still remained a challenge to build. This seems almost a contradiction, how can it be stunningly beautiful yet a challenge to build ? Well. the mainstream also put out beautiful kits that looked great in their boxes but made you pull your hair out when you tried to build them ! limited run multi media models were aimed at a number of modelers who wanted to challenge themselves & also build subject matter that was not produced by the mainstream.

This is where Classic Airframes fits in, being one of the founding Fathers of this market and one of it's undisputed masters. The Sea Hawk was never kitted before in injection plastic up until this point in time, only a single vacform by Falcon preceding it, & was a natural subject for them to do. Plastic, resin & photo-etch make up this model, plus decals for West German & Indian Navy aircraft. This aircraft is similar in all respects to CAF465 Sea Hawk in Fleet Air Arm markings, which was issued simultaneously, except obviously for the decals & new parts for the tail.

This is a fantastic kit to build, but be warned that it will be a challenge. It has been made for the modeler who loves to BUILD ! If you are not able to put in the time or the effort to do this piece justice, you are better off to work on the user friendly Trumpeter kit that was issued in 2007. If you are truly thrilled by the melding of plastic, resin & etch & are willing to push yourself, you will get the most out of this kit.

A classic example of how the short run market paved the way for the mainstream. If Classic Airframes had not issued their two Sea Hawk kits & shown that there was indeed a market for such an aircraft, would Trumpeter have invested their money to make their versions? Probably not. There are many more examples of how these limited run manufacturers made the current modeling landscape possible. Be sure to thank them by building one of their kits !