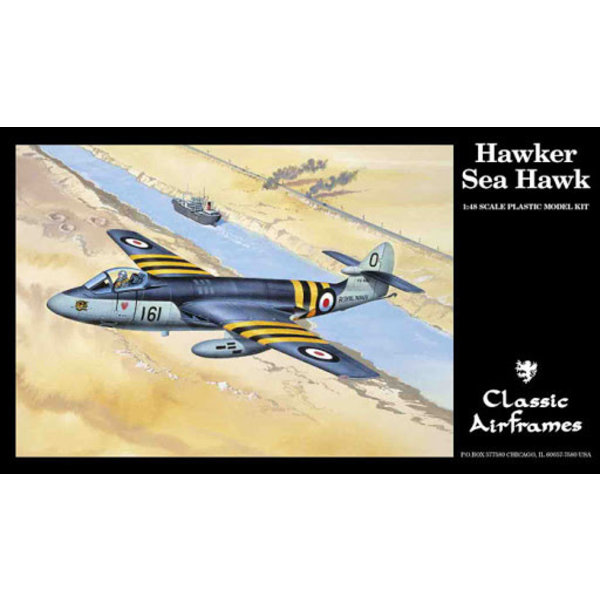 Classic Airframes was a legendary US manufacturer of model kits firmly entrenched in the field of short run, multi media production. All of his kits follow the same pattern- lovely plastic moldings, gorgeous resin castings, the best czech made etch, outstanding decals & occasionally metal parts that look just stunning in the box. All of his subjects were aircraft that had been neglected & ignored by the mass market due to the fear that there was not sufficient interest 'out there' to invest in such a production. Classic Airframes was a pathfinder who showed the modeling world that there was indeed an interest in the weird & obscure & that many modelers were willing to spend both the time and the money on these wonderful productions. He was so correct in his belief that many of his subjects have now been kitted by the mass market, such as the Sea Hawk here, thus making some of his kits now obsolete. Classic Airframes is not quite retired, he still works with Special Hobby and is still able to stun us with some of his creations.

Although heavily respected & championed by BUILDERS of model kits, there is much belly-aching that goes on when the name 'Classic Airframes' is mentioned, especially from the 'shake & Bake' crowd. These kits are complex and quite tough to build. They comprise of the efforts of several manufacturers & craftsmen from different continents coming together to create a work of art, & sometimes the pieces provided in the kit require a little work from the modeler to come together properly. They are a labor of love by the manufacturer & they need the same labor from the modeler to be successful ! Every kit issued has it's own personality, it's little quirks, but with discipline can be mastered. If you revel in the coming together of plastic, metal & resin, if you LOVE to build kits, then you will enjoy this kit. If you wish to just slap it together & call it a day, then you need to grab the Trumpeter issue of this kit instead. 'Nuff said.

There was a time when we rushed to our local model stores in anticipation of seeing the latest multi media offering by Classic Airframes & other like-minded manufacturers. Like the addicts we were, we pawed through the resin parts, marveled at the etch & ran our fingers over the smooth surface of the plastic parts. Those days I fear are coming to an end as short run manufacturing processes have improved to such an extent that the need for resin parts appears to be shrinking, even etch in some cases is absent from the latest issues. I laugh and cry at the same time, elated that we can now get the same wild & woolly subjects that Classic Airframes used to make in crisp,clean injected plastic, and cry because I really miss the fist-fulls of resin, massive sheets of etch & sometimes ill fitting plastic parts ! This is my nostalgia, fellow addicts ! The 1990's introduced us to the multi media kit, now that era is fading away, but it is being replaced by an era that is probably BETTER ! So why am I so sad ???