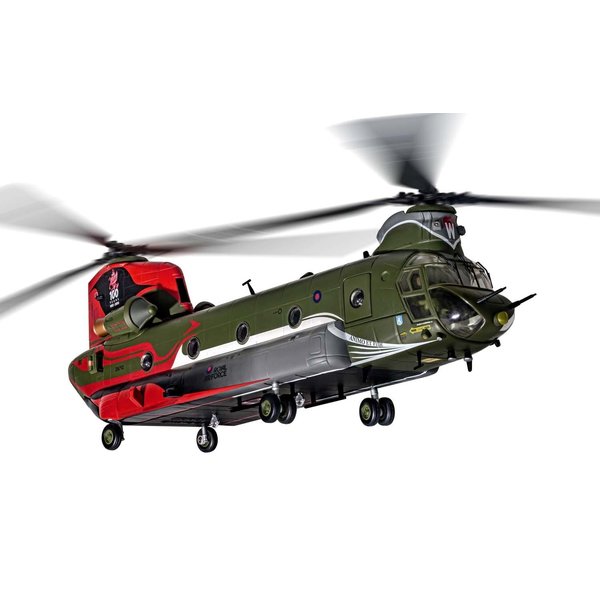 The unrivalled versatility and load carrying capabilities of the Boeing Chinook helicopter has ensured that this mighty twin rotor heavy lift machine is now one of the most famous aircraft to see post war Royal Air Force service. Equally at home on the battlefields of the Middle East as it is dropping ballast sacks to prevent a dam burst a little closer to home, the Chinook has now been in RAF service since 1980, with the latest variant of this magnificent machine enhancing its already legendary operational flexibility still further. As well as being one of the most important aircraft currently in service, the Chinook is a consummate Airshow performer and a real crowd favourite wherever it performs, with the RAF's Chinook Display Team having the privilege of demonstrating the aircraft's power and manoeuvrability to tens of thousands of people every summer.

Retaining their fully operational status at all times, the team must balance normal training requirements with practicing for their dynamic display routine and even though a Chinook is scheduled to take part in an Airshow near you, it could be called away on deployment at a moment's notice. If it does display, there is nothing quite like the experience of seeing this huge helicopter being hurled around the sky, with a Chinook's iconic 'blade slap' being a definite Airshow highlight.

During the summer of 2016, no less than three of the RAF's Chinook helicopters received attractive special centenary schemes, to commemorate the individual anniversaries of their parent squadrons. The first of the three aircraft to emerge from the paint shop was No.18(B) Squadron's ZA712 in April 2015, resplendent in its handsome red and black scheme, which included a large poppy on its front rotor housing. Originally formed at RAF Northolt in 1915, the squadron has a rich service heritage, which includes claiming more than 200 enemy aircraft destroyed by the end of the Great War and mounting the operation to drop a replacement artificial leg for famous RAF ace pilot Douglas Bader , following his capture in the summer of 1941.

During more than 55 years as a helicopter unit, No.18 Squadron famously provided the only Chinook support during the Falklands War, as ZA718 'Bravo November' was the only one of four of these mighty helicopters to survive the Argentine double Exocet missile attack on the Atlantic Conveyor container ship, requisitioned by the Ministry of Defence in support of the conflict. Commemorating the squadron's centenary, Chinook HC4 ZA718 wore these distinctive markings during a high profile official photoshoot, featuring the other two centenary Chinooks and also performed a number of displays during the 2015 Airshow season, to the delight of UK enthusiasts.

Produced under licensed. (Vehicle/Aeroplane Models) the distinctive logos, product markings, and trade dress are all trademarks of The Boeing Company.