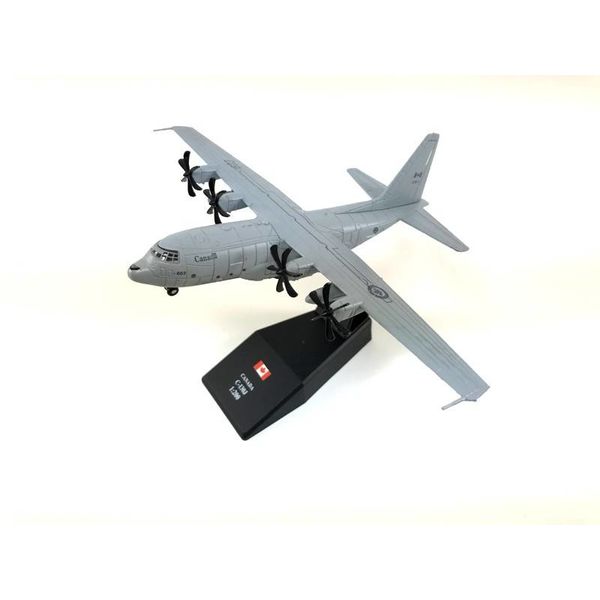 Pilot Collectibles are a line Canadian-themed collector's model aircraft. Its economical finished collectible model line features RCAF and other aircraft in standard collectible scales such as 1:200, 1:144 and 1:72 scale. Made in China, larger moulds (1:200 / 1:144 scale) are all plastic construction, smaller types such as the 1:72 scale models are diecast with some plastic control surfaces. Each comes with a plastic display stand.  Wingpan 7-3/4" x 6"

The Lockheed Martin C-130J Super Hercules entered Royal Canadian Air Force service in 2010 with the delivery of the first an order of seventeen aircraft. Designated the CC-130J Hercules in RCAF service, the Super Herc has replaced all of the remaining CC-130E models in the RCAF fleet, and will likely replace some of the remaining CC-130Hs as they reach the end of their long service lives. All of the Hercules models operated by the RCAF (CC-130B, CC-130E, CC-130H (with several subtypes including tankers) have all proven invaluable to Canada, both at home and overseas. The Hercules have served the RCAF for over 50 years, and are some of the highest time military Hercules in the world! The CC-130Js are operated by 436 'Canuck' Squadron, based at 8 Wing at CFB Trenton, Ontario.