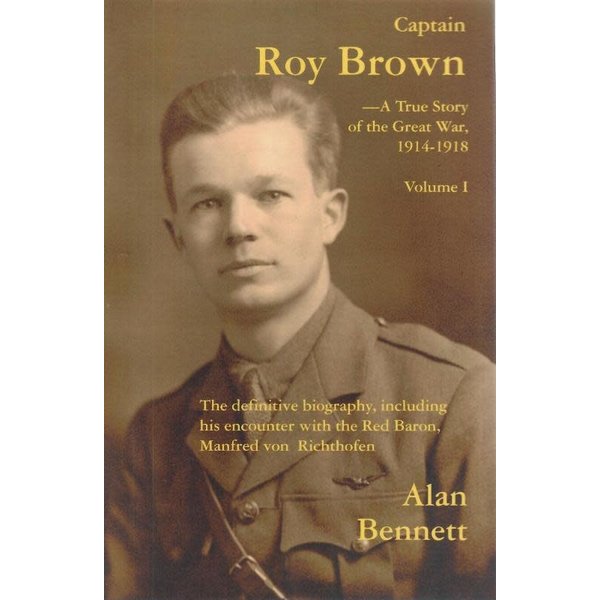 The mysterious death of the Red Baron in 1918 comes to life in this highly illustrated WWI history. The first part reveals Captain Arthur Roy Brown, Canadian ace fighter pilot, via previously unpublished letters, entries in his Pilot's Flying Log Book, and his surviving (and unedited) Combat Reports. Over 500 photographs, most never before published, plus diagrams and maps illustrate Brown's encounters with Manfred von Richthofen, the Red Baron.

The decades-old question surrounding the death of the Red Baron has been embroiled in controversy. In this book, the author has uncovered new information and insights, shedding new light on the events of that day. This is a true story of young men who fought and died for their country. It puts the reader behind the stick of a Sopwith Camel from the pilot's point of view. This is the first of two volumes.

Part One of this comprehensive study covers the life of Captain Arthur Roy Brown, who is well-known as an ace fighter pilot. The basic story is told in Brown's own words, via his previously unpublished letters home and the entries in his Pilot's Flying Log Book. His surviving Combat Reports are also included. The letters and the Combat Reports are unedited, and are used to tell the story within a military, historical and geographical context. They are accompanied by over 500 photographs, most of them never before published, plus diagrams and maps.

Part Two of the book covers Captain Brown's encounter with Manfred von Richthofen, the Red Baron, in detail. The story is told on the basis of recently released official documents of the time, together with recently offered letters written by some of the participants and witnesses. The new information corrects several well-established beliefs, and is able to provide the true story together with the necessary confirmation. In 1995 Alan Bennett toured the site in France where Captain Brown had attacked the Red Baron on 21 April, 1918. As an experienced pilot of similar aircraft, he had grave doubts as to the truth of some parts of the story. The eventual result was a book written in conjunction with Norman Franks: "The Red Baron's Last Flight." After plentiful information from readers, Captain Roy Brown's family and Wop May's son, plus further research in France, a considerably different picture of the entire event and of Roy Brown's life emerged. The new book, Captain Roy Brown, tells the complete definitive story. Margaret Harmon is Captain Roy Brown's daughter. She lives in Arizona, and provided most of her father's letters. Denny May is Wilfrid "Wop" May's son. He lives in Alberta and is very active in keeping his father's legacy alive. Alan Bennett finished compiling his book on Captain Roy Brown around Christmas of 2006. He was always striving for perfection to make sure his manuscript would be as complete as possible. He received correspondence from around the world to help him in this endeavour. Though not in great health towards the end, he nevertheless continued his research with passion and zeal. Alan Bennett passed away in January 2007.