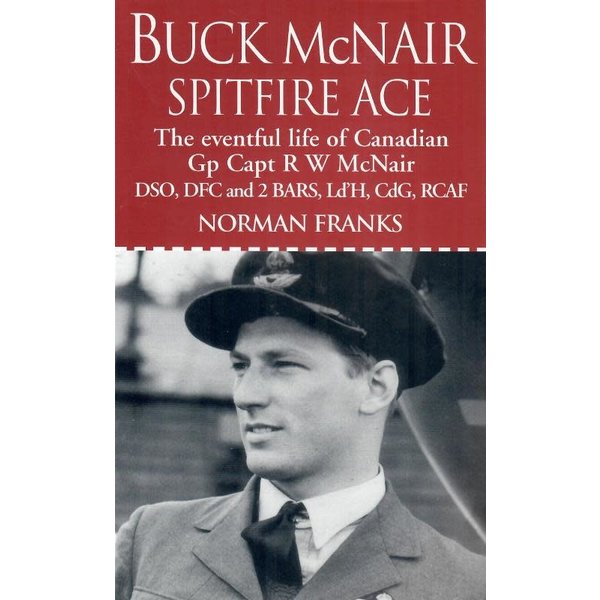 Robert 'Buck' McNair came from Nova Scotia, the second of three sons born of a mix of Scottish and German parents. As a young man he became interested in flight, and was lucky enough to be able to fly float planes off the Canadian lakes. When war came, he went through flight training in Canada, sailed to England, and in the summer of 1941 found himself with the newly formed 411 Squadron RCAF.

Eventually this unit began flying sweeps over Northern France and he saw his first combat actions during that autumn. An aggressive fighter pilot, he was chosen by his Canadian CO to accompany him to the besieged island of Malta in the spring of 1942, to coincide with the arrival on that island of the first Spitfires. Almost before he found his feet, he was nearly killed in a bombing raid.

In wartime Malta, there was no chance to recuperate and he had to continue flying which he did with distinction, gaining a number of victories and winning his first DFC. Returning to England later in 1942, he saw action over Dieppe in August, and became a flight commander. After a break in Canada, he took command of 421 Squadron RCAF in the summer of 1943, leading his pilots in many sorties over France and gaining more victories and two more DFCs. Finally as a wing leader in early 1944 his leadership brought him the DSO.

However, he had been injured on one sortie which forced him to bale out of a burning Spitfire, and he was taken off operations shortly before D-Day. His score of victories however, had reached 16, with others probably destroyed and damaged. After the war he continued in the RCAF at home and abroad. In 1953 he was a passenger in a North Star airplane which crashed at Vancouver airport and his bravery in helping extricate those on board resulted in the Queen's Commendation for Brave Conduct. Later he commanded No. 4 Canadian Wing in Germany and continued to fly fast jets. In the last years of his life it was discovered that he had contracted leukemia through treatment to help with an injured back, the result of two wartime bale-outs.

However, he continued in the service, his final posting being to the Canadian Embassy in London, until his untimely death in early 1971. This is a remarkable story of courage and heroism by one of the Second World War's top-scoring fighter pilots who inspired his men and fellow pilots in actions above the skies of France and Malta, and who, despite being almost blind in one eye, continued to lead and spur his men onto greater actions.