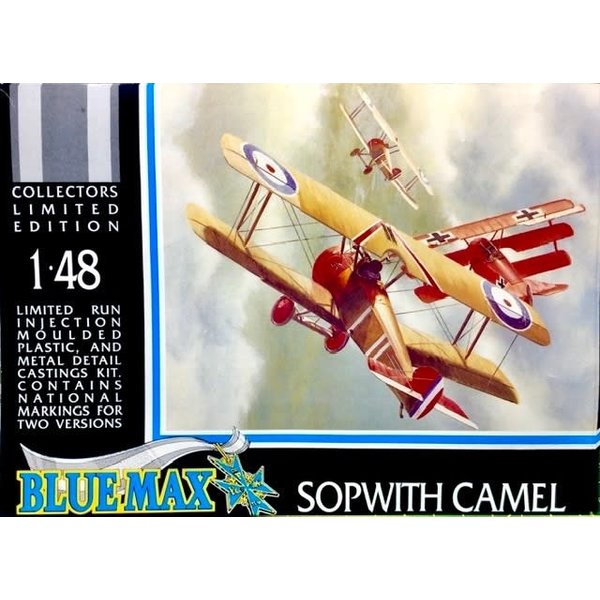 Blue Max & Pegasus models, helmed by Chris Gannon, are a high-water mark in the history of short-run aircraft models produced during the 1980's & 1990's. Blue Max focused on WW1 aircraft in 1/48 scale, Pegasus seemed to focus on anything that took Mr.Gannon's fancy that was not produced by the mass market in 1/72 scale! Both series were made in production batches of 1000-1500 pieces each and were highly respected by modelers of the day, a respect that still stands! Mr.Gannon launched another company called Silver Cloud later in his career which produced the type of esoteric subjects in 1/48 scale that he was doing in 1/72 with Pegasus. Mr.Gannon has since retired & his company sold to Freightdog Models, which continues to maintain many of his productions to this day.

Mr. Gannon's models were never intended for the 'slap-together' crowd, but required careful assembly and even an understanding of the manufacturing process of the real aircraft. His models fit like 'a hand into a glove ' into Ray Rimmel's Windsock Magazine & related Datafiles, and together they brought WW1 modeling to another level. They are a bridge between the vacform kits of the 1970's & the Eduard and Wingnut Wings kits that were to follow in his wake. Blue Max was not alone in the role of 'bridge'- there were many fine companies that toiled to elevate the art of modeling during this time period. I'm happy to see a few, such as Copper State Models, still around [ under new ownership ] to fan the flames !

The Sopwith Camel was issued once in 1997 in, I believe, a run of 1500 pieces. It has never been re-issued. Both the land-based F.1 & the naval 2F.1 can be built from this kit, which means that you get two different fuselages, different upper fuselage decking,different upper wing centre section & the longer lower wings ! The kit is molded in Mr. Gannon's standard soft grey [ & white ] plastic & includes a bag of nicely cast metal parts, strut stock & decals. This is a classic short run kit and demands careful assembly. It is intended for the connoisseur! Armed with Ray Rimmel's review from Windsock & one of the Camel Datafiles [ not to mention the Hayne's Owner's Manual that we sell ] you are ready to relive cutting edge modeling of the 1990's! In spite of stiff competition from Eduard, and requiring a more involved build process, this kit still maintains it's place.