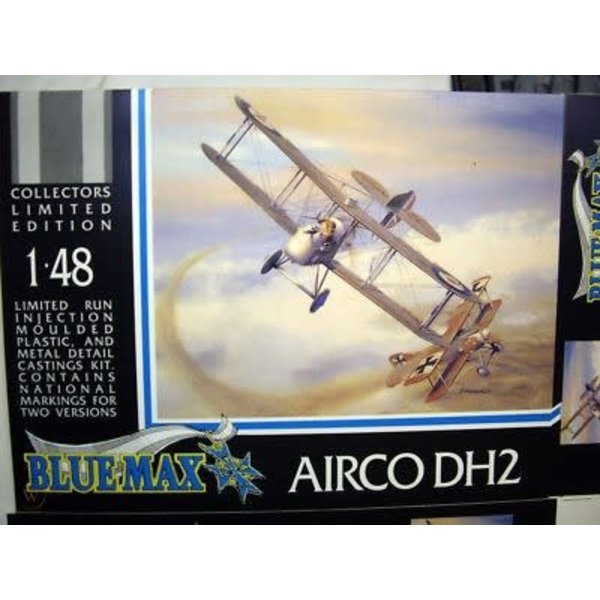 Chris Gannon's Blue Max models were on the cutting edge of short run model manufacturing during the 1990's, riding a wave of creativity in this field that had exploded during the late 1980's. Challenging the mass market was a small army of enthusiasts creating little gems in their basements, garages & sheds and issuing them in small, yet [ I assume ] profitable batches to keen collectors & modelers around the world. This was a time when vacuform slowly gave way to short run plastic as the medium of choice, aided & abetted by the very first photo-etch sets and the introduction of the new wonder material, resin, into the hobby!

looking at this kit now, one may fail to see what the fuss is about, as we currently live in an era were brilliant molding & execution are simply expected ! But this kit represents were this process began ! Go back to 1996 & this kit was simply cutting edge, even if it was arguably the most difficult thing to build that Mr. Gannon ever created ! Beautifully molded with intricate detail, these limited run kits quite frequently put the mass market to shame. If only they were easier to build- & yet by struggling with them, we challenged & improved our skills. Thanks to this struggle, we have demanded the production of far more detailed & complex subjects, and now we can enjoy building kits of the complexity of Wingnut Wings & Zoukei Mura !

Blue Max helped bring new respect to the field of serious WW1 modeling. Alongside Windsock Magazine, they fanned the flames of this field of enthusiasm & led us to where we are now, with Wingnut Wings ! Having said all this, I will say that as nice as this kit is in the box, & as glowing as the reviews were in Windsock, this kit is a crazy thing to build ! Yes, it can be built, several fantastic builds have appeared online or in the magazines of the day, but it is for specialists only. This is a flying box, kept together by miles of wires & rigging & will probably drive you insane trying to finish it. Most of you will gravitate towards the more user friendly Eduard kit. So be it ! But be advised, this is where our current golden age began!

Short run plastic, metal parts, strut stock & decals, plus about 6 months worth of rigging required to finish ! You have been warned.....