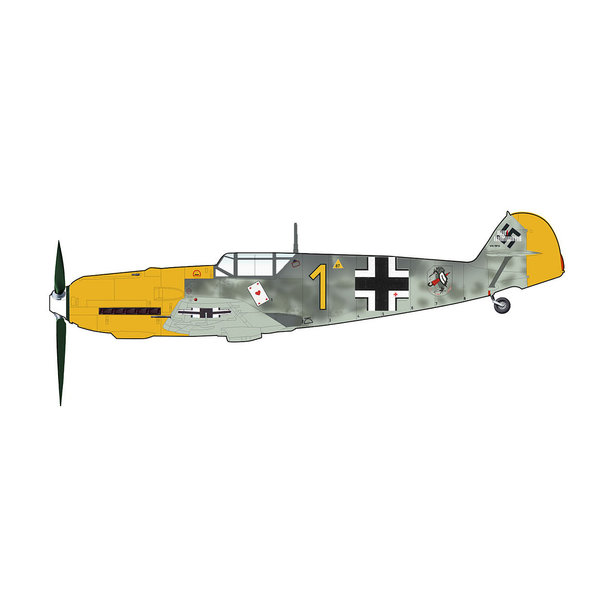 The first German mass produced 109 fighter was the Bf-109E that has been mistakenly referred to as the Me-109. The Bf is the designator for the Bayerische Flugzeugwerke (BFW) (Bavarian Aircraft Works) that produced the original aircraft. In 1938 Messerschmitt took over BFW but throughout WWII German handbooks and documents referred to the aircraft as the Bf-109. By the end of 1939 the Bf-109E (Emil) had replaced all other 109 variants and equipped 13 Gruppens with 40 aircraft each. The Bf-109 was the main single-engine aircraft until the Fw-190 came along.

Josef “Pips” Priller joined the Wehrmacht in 1935 and transferred to the Luftwaffe in 1936. Originally assigned to JG 334 he transferred to JG 51 in May 1939. September 1, 1939 Priller was appointed Squadron Leader of the JG 51/6th Squadron, claiming his first victory on May 28, 1940 during the Battle of France. From July 12 1940 until November 1940, Stab JG 51 was located at Saint-Inglevert Airfield, France. On October 17, 1940 Priller claimed his 20th victoryand was awarded the Knight’s Cross of the Iron Cross. Priller flew 307 combat missions claiming 101 victories.