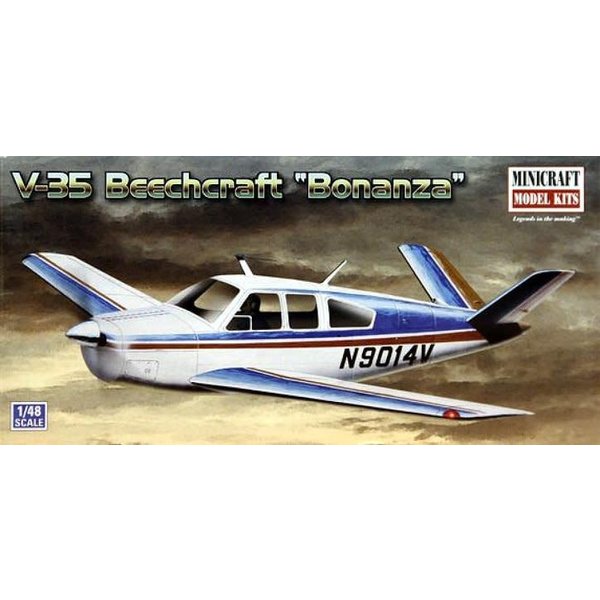 First issued by Bandai in 1973, this kit still conforms to modern standards & has lost none of it's charm. Part of a large family of civilian light plane model kits produced in the 1970's by legendary Japanese manufacturers Bandai,Nitto,Entex,Doyusha,Nichimo & others, the moulds were made to a very high level & were well ahead in tooling & engineering compared to some Western brands at that time ! That they still hold up to this day is no surprise & we thank Minicraft for keeping them available to us. The 1970's were a golden age for civilian model aircraft kits, there was certainly more variety on the store shelves than there is now. Sadly, most of these models have disappeared now, not to be re-issued, only available as 'rare collector's items' on ebay for silly prices!

This edition represents the aircraft in it's original incarnation as the 'V'-tail with two bladed prop. It has been issued many times in different boxes under various brands, but from about 1998 on, Minicraft has remained sole owner of the mould. Minicraft has since issued the model in single-tail form as well as V-tail.A very good kit with an engine, interior detail & a stand & recommended to all civil modelers [ as opposed to uncivil modelers ! HAR! HAR! ]