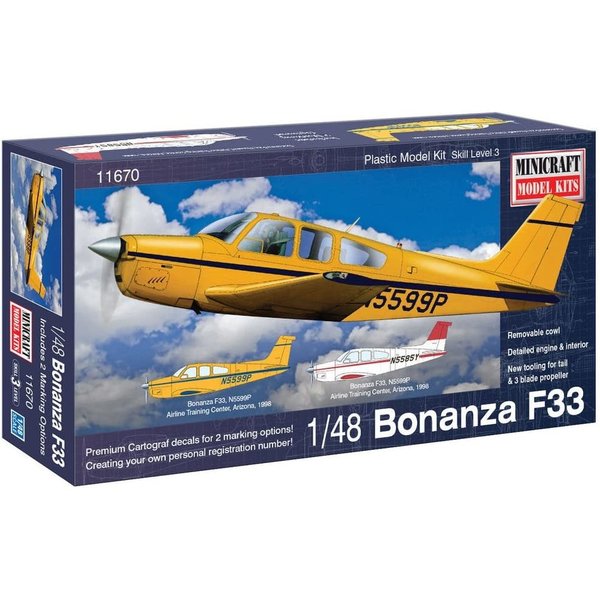 First issued by BANDAI in 1973, this model was part of a large series of civilian light aircraft also maintained by ENTEX, NICHIMO & DOYUSHA. Many of these kits have ended up in the hands of Minicraft over the years, ensuring that they will be available for future generations of modelers. In spite of it's age, this kit looks like it could have been tooled today- it is not the build-it-yourself toy that many kits were from this time period, Japanese manufacturers really took modeling seriously & were ahead of the pack for most of the 1970's in their tooling & engineering! Beautifully detailed, it includes an engine with removable cowls & an interior. Since it was first issued, the kit has been best known for representing the aircraft in it's twin or 'V' tail configuration, but Minicraft have actually made a change with this issue & given us new parts for a standard single tail, plus a three bladed prop [ the two bladed prop from the original kit is still included ]. This change to the kit is not permanent as Minicraft have issued this kit again in it's original V-tail form since this issue. A stand is included & the gear can be built up or down. An outstanding kit & highly recommended to all interested modelers. Thanks to Minicraft for keeping these kits available.