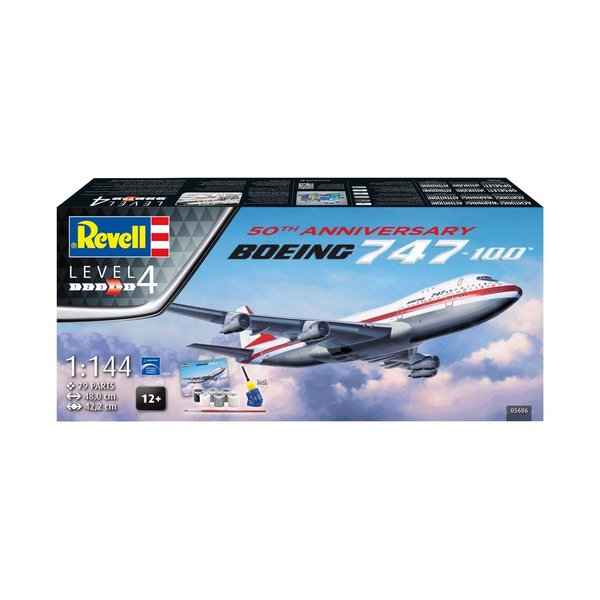 A welcome re-issue! I believe the last time we saw this kit on the shelves was back in 1990, in British Airways [ Landor ] & Thai markings. This is currently the only 1/144 B747-100 on the market. Originally issued in 1974, the kit does show it's age- it has a little flash,raised lines,and does not have the finesse or detailing of a modern kit. It does have a stand though, as did most aircraft kits in the 1960's & 1970's.This kit is a 'Gift set' with glue,paint & brushes included- the glue is fine, but in my opinion the paint is symbolic. A true fanatic will need more than the six paints provided, they may not be enough to cover the model anyway, but may keep a kid quiet for a few hours. You will be better off airbrushing or spray painting the major components, painting by hand will be a chore to say the least !

The highlight of the kit are the decals, printed in Italy for Revell Germany, & give you full markings for the first prototype N7470, which will bring the kit to life.

A decent kit well worth working on, & one that I cannot see being re-issued any time soon once it is sold out. Take a look on ebay & see what the maniacs are trying to get for the 2006 re-issue of the Cutaway B747 kit [ original being issued also in 1974 ]. It's scary- greed knows no bounds !!!

Check out the review on IPMS Deutschland ! [ Be sure to hit 'translate' or you'll be reading it in German!- Jawohl ? ]