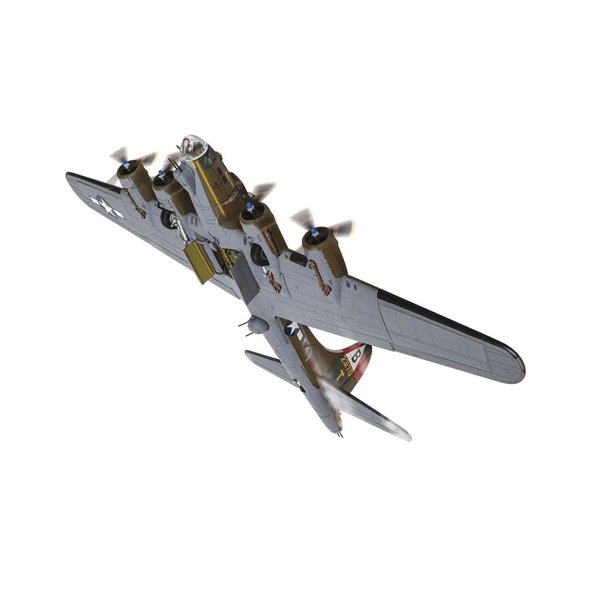 +This item is available for Preorder+

B-17G Flying Fortress 42-31713 ‘Snake Hips’ arrived at the USAAF’s 92nd Bombardment Group base at Podington in February 1944 and quickly benefitted from a name and nose artwork that her crew hoped would bring them luck in the air battles to come. The aircraft saw extensive action over the next few months and brought her crew through relatively unscathed, until undertaking a mission to the heavily defended synthetic oil plant at Leuna on 24th August 1944.

On the run in to the target, ‘Snake Hips’ took a direct 88mm flak hit in the bomb bay and whilst the explosion did not detonate the bombs, it did blow a gaping hole in the side of the fuselage and start a hydraulic fire which threatened to engulf the bomber. The aircraft dropped out of formation and headed for home, but on attempting to jettison the bombs, several ‘hung’ and members of the crew were forced to deactivate them, in the midst of all this airborne chaos.

With two engines out and the pilot heading for the relief landing airfield at Woodbridge, he ordered his crew to parachute to safety, knowing he could not leave his station and fearing the landing may result in their injury. Fortunately, he managed to land the bomber without further incident and ‘Snake Hips’ became one of the most heavily damaged B-17s to make it back to the UK during the Second World War.

As US heavy bombers began their strategic bombing campaign against German targets in occupied Europe towards the end of 1942, they were hoping that the heavier calibre of guns used on their aircraft would prove decisive against the threat of Luftwaffe fighter attack, particularly when their bombers were arranged in defensive boxes, bringing the firepower of hundreds of guns to bear.

Assembling hundreds of bombers above the English countryside in all weathers as they rose from their respective bases, would prove to be a huge challenge and collisions were relatively commonplace. Once formed up and heading for their targets, accurate navigation was essential if they were to remain in formation and avoid the murderous flak fields, until they were actually on the run in to the target, all the time knowing that the Luftwaffe were ready to pounce, often in large numbers.

During the early months of the campaign, the bombers would have to run the gauntlet of German defences alone, as Allied fighters lacked the range to escort the bombers all the way to their targets and losses were crippling. Once longer range Lightning, Thunderbolts and Mustangs entered service, the bombers had their protection and as a result both bombing accuracy increased and Luftwaffe fighters began to fall to the guns of their ‘little friends’.