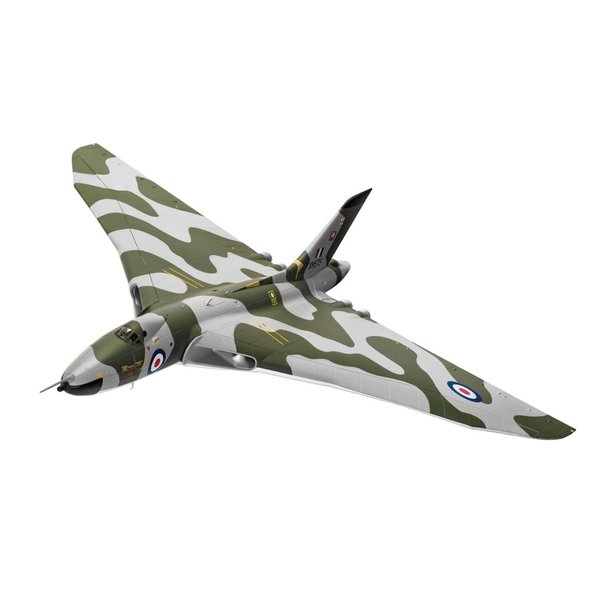 One of the most distinctive military aircraft ever to take to the skies, the mighty Avro Vulcan provided Britain with a high-profile nuclear deterrent during the period known as the 'Cold War', as the second of Britain's famous V-Bombers to enter RAF service. Continuing a proud heritage of Avro bomber types which began with the twin engined Manchester, the Vulcan was a highly advanced tail-less delta design which possessed the ability to effectively deliver either nuclear or conventional weapons, including the fearsome 'Blue Steel' standoff nuclear missile. Operating at higher altitudes, the first Vulcan's in RAF service were finished in an overall white anti-flash scheme, intended to protect the aircraft in the seconds following detonation of a nuclear device, however, advances in Soviet anti-aircraft missile defences brought about a significant change in the aircraft's attack profile. Moving from high to low altitude strike operations during the early to mid 1960s, Vulcans retained their white undersides, but were given a striking grey and green camouflage on their upper surfaces, markings which really suited the huge delta shape of this magnificent aircraft. Although moving to low-level bombing operations, retention of the white anti-flash undersides clearly illustrates the Vulcan's continued role as a nuclear armed strategic bomber.

Lincolnshire's RAF Waddington base will always be inextricably linked with the operation of the Avro Vulcan bomber, with the station welcoming the first Vulcans to enter RAF service with No.83 Squadron in 1957 and going on to serve as home to the last flying Vulcan (XH558) of the Vulcan Display Flight until its disbandment in 1992. At their height of operations, the Vulcans of the Waddington Wing must have made for an impressive sight, particularly when performing a four-ship scramble, with these mighty bombers, which possessed fighter-like performance, blasting into Lincolnshire skies, one after the other, in a high-profile demonstration of Britain's aerial might. Avro Vulcan XM575 was the second B.2 Blue Steel equipped aircraft to be fitted with the upgraded Olympus 301 engines and would go on to see service with Nos.617, 101, 50 and 44 Squadrons, as part of both the Scampton and Waddington Wings during its career. She was one of three Vulcans which took part in the Falklands Victory Flypast over central London in October 1982, but was retired from RAF service the following year. Her final flight would be to East Midlands Airport and a new career as the much loved centrepiece exhibit of the East Midlands Aeropark, where she can still be admired to this day. She is displayed wearing the colours of RAF No.44 Squadron, the unit in which she was operating when this icon of the Cold War was withdrawn from service.